You are here: Home / Fiction / Romance / Protecting Your Sources by Holland Rae 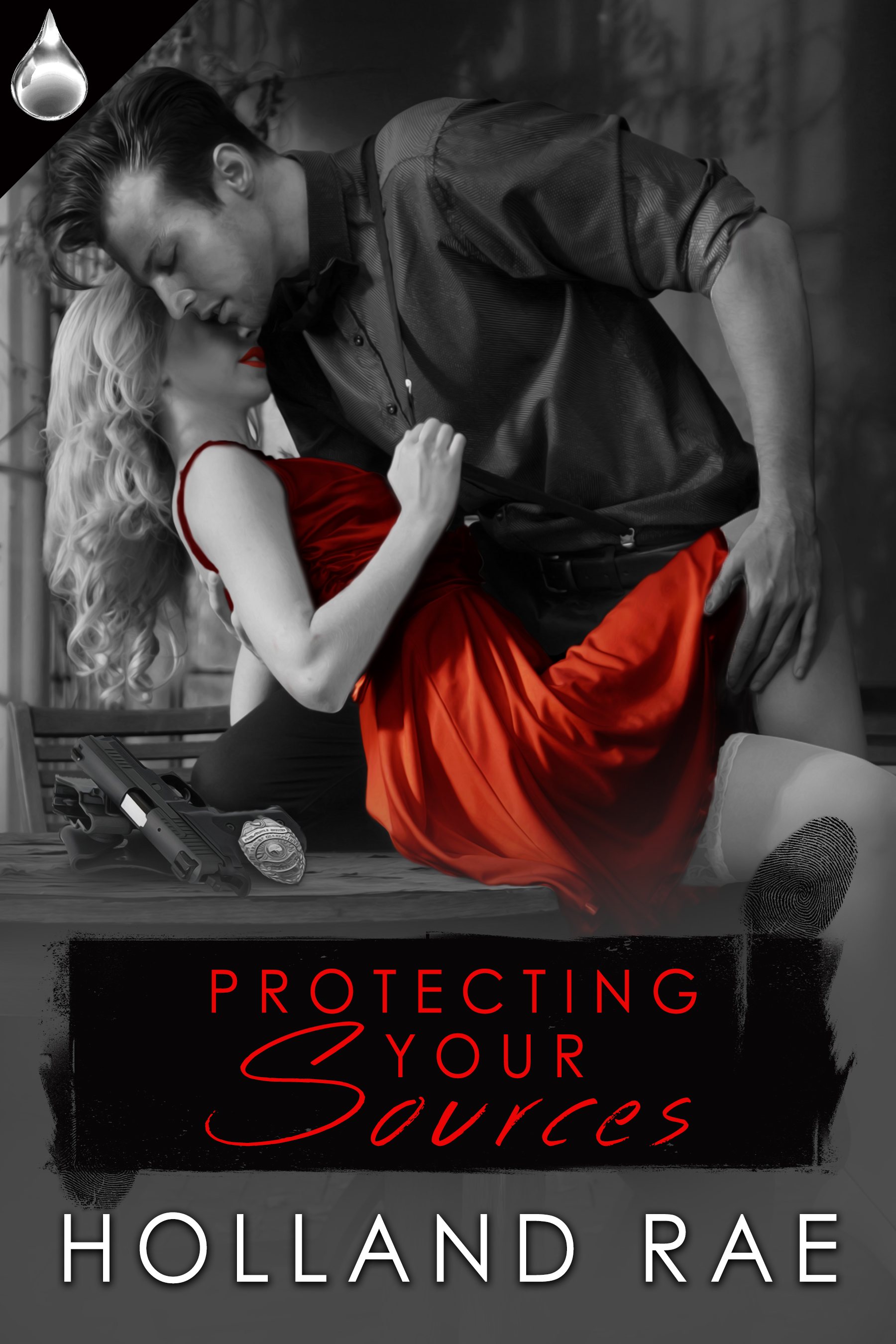 For the past six years, Boston crime reporter Sarina Mason has shared an amiable, if somewhat flirtatious relationship with sexy-as-sin city detective Kit Holden. But three months ago, after an attack on the precinct which involved Kit shielding her body with his own, Sarina knew that their professional working friendship was developing into something more, something dangerous for both of their hard-earned careers, so she turned tail, avoiding the precinct and the handsome, distracting detective inside.

When a copycat serial killer hits the city sideways, however, Sarina knows she has to get the story, and with it, see Kit again. What starts as the news story of her career, soon becomes more personal as Sarina discovers an important clue, effectively making herself the killer’s next target. Kit has sworn he’ll stop at nothing to keep her safe, but as she gets mixed up in history, danger, and her own wild emotions, Sarina knows that her relationship with Kit will be forever changed, if she gets out alive.

What Inspired You to Write Your Book?
I confess, this book is semi-autobiographical. I went to journalism school in Boston, and fell in love with the cop and reporter dynamic. No, I've never had an affair with a hot Boston detective, but I like the power dynamic and suspense intrinsically built into their relationship. Cops and reporters aren't supposed to get too close, but in this case, they just might!

How Did You Come up With Your Characters?
Again, not entirely derived from my imagination. Kit was the rough and tumble cop that doesn't want to show emotion. I drew Sarina from several powerful and career driven women I studied and worked with. It's tough to be a female journalist, especially on the crime beat, and I wanted her to be strong and also still have a joy for life. I like to think I achieved that!

SARINA Mason caught a glimpse of herself in the rearview mirror of her ancient Volvo, and sighed fiercely at her reflection. The car harkened back to an era where high class was putting black plastic anywhere it could fit, and seat covers came in various shades of leopard. But it ran, and it got her from one place to the next, which was a requirement for her job as a crime reporter at The Tribune, so what more could be asked of it, really?
What Sarina wasn’t sure was running properly—in fact, she was certain it was operating with a distinctive fault in the connectors—was her own damned brain. What other reasonable explanation could there be for her coming down to Precinct 16 in South Boston, with the intention of locating one Detective Kit Holden?
Maybe she had shorted a fuse, Sarina thought for a moment, rifling through her reporter’s kit—camera, voice recorder, notebook. She hadn’t come looking for Holden in three months, and there was a damn good reason why. But this time she didn’t have a choice. This time she couldn’t pass off the interview to a junior reporter, or put her article in with the token press statement. No, this time Sarina knew she needed some one-on-one with the good detective, and damned if that didn’t make her just a little bit excited.
* * * *

Detective Kit Holden was in a foul mood. He had a goddamned serial killer running roughshod through his city, and everyone from the college papers to the Mayor himself was breathing down his goddamn neck, looking for answers that Kit simply did not have. The amount that he did have regarding the string of bizarre homicides was so paltry he’d have encountered more luck playing Clue in the statehouse basement.
Kit was just cursing the precinct’s unpalatable coffee dregs, when he caught sight of something that made his mood go from foul to seething in two seconds flat. A flash of golden-brown hair, a self-assured, confident aura, yes, Sarina Mason had the ability to crawl under Kit’s skin and irritate in him in a way no one else in his life, press or otherwise, had perfected. Miss Scarlet, indeed.
“Miss Mason…” He stepped forward, tossing the disgusting coffee into the trashcan, and not bothering to school his voice into anything other than obvious distaste at her arrival. Truth be told, Kit didn’t dislike the beautiful reporter on a personal level. He had a grudging respect for her hardheaded desire to report the truth, and he knew that she was damned good at her job. But the age-old rivalry between cops and journos was reason enough for him to let out a little of the venom he was feeling for the day as a whole in her direction.
At least, that was what Kit told himself. He told himself that the irritation he felt when he spied Miss Sarina Mason was entirely based on the feelings of irritation that city detectives had for young, career journalists, and nothing at all to do with the way his body, all of his body, stiffened around her, nothing at all to do with how he was already close to busting a hole in his increasingly tight dress pants at the sheer scent of her wafting across the room.
“I haven’t seen you in a while, Detective,” she replied, those plump, dark red lips looking a sight too desirable on a woman wearing a simple black blazer and sensible boots. “What say we have a little chat, catch up on old times?”
Kit raised an eyebrow in her direction, leaning against the wall of the breakroom and eyeing her suspiciously. He’d always had an amicable relationship with The Tribune. The ongoing and altogether impossible to ignore flirtation that had peppered his professional relationship with Sarina Mason was both strong and mutually beneficial. Kit had never felt it wise to withhold everything from the press, having seen the disastrous effects of that strategy time and again, and so he’d offered information and details as far as he could, and Sarina had reported them fairly and cleanly. She was nothing, if not a damned good reporter.
Until. Until three months ago, after a routine interview regarding several incidents of drug trafficking, when members of a gang had attacked the precinct. He could remember pushing Sarina under his desk, eventually shielding her body with his own, as a shower of bullets, both criminal and cop, had rained down upon the station.
He had seen her only once afterward, in three damned months, when she had visited him in the recovery room of Mass General, thanking him for saving her life. And then radio silence, nothing but junior reporters and lame ass phone interviews that had Kit wondering just what had changed between the two of them that day. What he refused to analyze, even though it had remained a constant in the back of his mind, was why he had been so damned disappointed by her sudden disappearance.