You are here: Home / Fiction / Action & Adventure / Press On Regardless by Brent Baxter 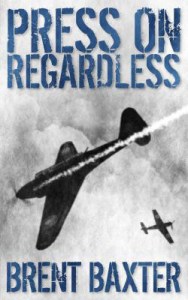 It is May 1940. Most of the Royal Air Force squadrons deployed to France wait impatiently for the impending German invasion.

If he is successful, he can change the course of the coming battle, and maybe save his oldest friend in the process. But the RAF are about to face their greatest ever challenge, and the Germans are not Attwater’s only enemy.

Based on real events, Press On Regardless is an action-packed story of the RAF in France during World War II.

What Inspired You to Write Your Book?
My inspiration for writing stories of the RAF in WWII came from research I did while building scale models of the aircraft flown during the war. I quickly discovered many exciting tales of incredible bravery as well as fascinating but little known aspects of the war. In my stories I try to bring some of these more obscure elements to life, highlighting courage and sacrifice as I do so. I enjoy reading action stories and watching action movies, so I focus heavily on combat and other action.

How Did You Come up With Your Characters?
I developed most of my characters from different facets of real people I discovered during my research. Some of the characters, such as Sidney Cotton and Arthur Barratt, were real officers in the RAF in WWII. I have fictionalised their personalities and exploits, but based them heavily on their namesakes.

Book Sample
Machine gun and cannon fire peppered his forward fuselage and canopy. Plexiglass exploded in around him. Black smoke began to billow from his engine. Leach’s heart pounded frantically. He tugged the throttle back. The smoke thickened. Moments later it began to bleed into the cockpit around his feet.

“Red Leader bailing out,” Leach said. “Good luck lads.” He pulled the control column hard over, rolling the Hurricane onto its back, leaving him hanging upside down, his harness digging into his shoulders. The smoke filled the cockpit. Heat from behind the firewall radiated into the footwell.

Leach yanked the canopy open and ripped off his mask. Smoke rushed past his face. Coughing painfully, he squeezed his thighs around the control column and fumbled with the catch on his safety harness. Flames appeared in the footwell, flickering around his feet. No, damn it, no! He yanked out the safety release pin and dropped out of the cockpit like a stone.

About the Author:
Brent has a passion for military aircraft, from World War II to modern day. When he’s not writing novels about them, he enjoys reading the many incredible true stories of bravery and tragedy of the pilots and crews of World War II.

Brent lives in Sydney, Australia with his wife and son.