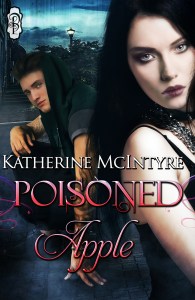 Snow White’s a goth and Prince Charming’s a jerk.

On Neve’s eighteenth birthday, her stepmother kicks her out. A group of diner rats offer her refuge—including Brendan, who offers his couch for her to crash on. But the more time she spends with him, the more he confuses her. One second, he’s kissing her. The next he’s pushing her away.

Believing her life has reached rock bottom, Neve struggles to ditch her “damaged girl” label. But when she uncovers the truth about her life, she’s rocked to her very foundation. Will Neve be able to hold on to the good things coming her way, or will her bad luck poison everything?

What Inspired You to Write Your Book?
Funny story, this was a rewrite of an old, old concept I had in my early days of writing. I love twisted fairytales and the Snow White story’s always been interesting to me. The idea for Poisoned Apple came when I wanted to explore what would happen to a modern day Snow White who had to deal with gritty urban problems. Poisoned Apple was born–mother died early, father ditched and left her with an evil stepmother, and as the story unfolds, she travels deeper into the web of family secrets.

How Did You Come up With Your Characters?
With Poisoned Apple, my Neve, or Snow White, made a huge transformation from the original story I wrote. The initial story involved a kind of passive character who got sucked into cocaine and other problems. When I rewrote it, her character was the biggest change. (And I ditched the cocaine in lieu of focusing on family issues) Neve in Poisoned Apple is a sarcastic, defensive loner who doesn’t trust easily and is used to holding her own, because her family’s let her down.

Book Sample
Neve knew this day would come. She’d been dreading it the past year, wondering what would happen and, for the life of her, unable to hazard a guess as to where the future would take her. After spending the past weeks worrying and hours in front of her computer screen talking to Internet strangers who had given her little useful advice, she’d grown wearier each day. At last, it had arrived—her eighteenth birthday.

Tugging at the spiked collar around her neck, she stole a glance at the front door of the house she’d grown up in. The peach siding created a gorgeous contrast to the stucco walls and the dark-brown roof tiles—a fairytale house in a fairytale suburban neighborhood. She rolled her eyes. Too bad life had been anything but.

She’d never wanted any of this, but such was life. Her dad hadn’t asked when he’d ditched. No, he’d pranced out of the closet and ran off with his lover, leaving her with Veronica.

Her neck itched from too much sun. She’d been out here two hours, pacing around her cul-de-sac one hundred thirteen times since she’d returned from her shift at the café and, so far, had accomplished nothing. Her stomach clenched with the stark hollowness of what would happen the moment she walked through that door. Inside, Veronica would be waiting. As much as she hated confrontation and knew in her gut trouble was brewing, she’d have to deal with her stepmother at some point and was better off handling this mess without a bad case of sunburn. Neve let out a weary sigh then trekked up the paved walkway to her front door. Time to face the beast.

About the Author:
Katherine McIntyre is an author of steampunk adventure, dark comedy, urban fantasy and paranormal romance stories. She splits her time writing and working the day job, but as for creative pursuits, she’s dabbled in a little bit of everything. A modern day Renaissance-woman, she’s learned soapmaking, beer brewing, tea blending and most recently roasting coffee. The one constant from a very young age was her passion for reading and writing. For more casual content, she’s a regular contributor on CaffeineCrew.com, a geek news website. With more imagination than she knows what to do with, writing proved to be the best outlet.