You are here: Home / Fiction / Romance / Poet of the Wrong Generation by Lonnie Ostrow 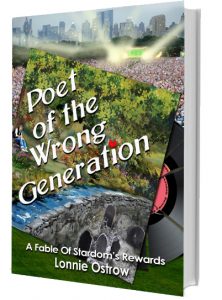 “It’s not that I don’t love you, and my tears are yet to dry.
But you can’t go back and forth forever and we’ve already said goodbye.”

Through these words, a young poet unearths his musical soul while severing ties with the woman he loves after her stunning betrayal. Unknowingly, in writing this ballad of liberation, he will soon evolve as one of the fastest rising stars on the pop music landscape.

The year is 1991; the place, New York City. Here we meet Johnny Elias, a college student from Brooklyn with boundless adoration for two things in life: timeless popular music, and the heart of a sweet, complicated young woman who is clearly out of his league.

Megan Price not only is the object of Johnny’s affection, but also the only daughter of New York’s most powerful PR woman: the indomitable Katherine Price.

Projecting that her daughter’s boyfriend will never live up to the family standard, Katherine cleverly perpetrates a series of duplicitous schemes to rid Johnny from her high-class world. But in her callous disregard, she inadvertently sets him on a determined course to his improbable musical destiny – while sending her own daughter spiraling down a path of despair.

Poet of the Wrong Generation tells the symmetrical story of a lovable underdog and his meteoric rise to stardom, his humiliating downfall and his unprecedented attempt to reclaim his place as the unlikely musical spokesman for his generation. At the heart of Poet is a tale of star-crossed lovers and their struggle with unforeseen success and disillusionment, in an attempt to rediscover lasting harmony.

Uniquely integrating a variety of original song compositions, Poet projects the epic clash between true contentment and the fable of stardom’s rewards; a nostalgic journey through the major events of the 1990s, with a cherished cast of characters and a stunningly unpredictable conclusion.

What Inspired You to Write Your Book?
Poet Of The Wrong Generation due to be released on November 10, 2016.

I was a novice songwriter back in my teenage years into my early 20s. So in fact, the words I scribbled in spiral notebooks 25 years ago were stashed away for decades, only to become an integral part of creating this novel when I came up with a storyline and the characters.I've been a fan of classic rock and folk music for as long as my memory stretches. So the concept of me writing a novel with a rock star protagonist should come to the surprise of no-one who knows me. I often wondered: what might life have been like had I actually pursued a musical career back in the 1990s? I suppose that some of this book is how that far fetched fantasy might have played out.

Another notable aspect is my years of working with celebrities. As a kid, I had such reverence for the life of rock stars, athletes and other entertainers. Then I started to work closely with some of the biggest names in entertainment and quickly discovered that fame and glitz of the celebrity life is mostly a facade. These cherished individuals all have the same everyday wants, needs and problems as the rest of us.

With Poet of the Wrong Generation I am hoping to have combined all my unique experiences to bring you a novel of love & betrayal, music & fanfare, downfall & redemption — a fable of stardom's rewards, set in New York City during the 1990s.

How Did You Come up With Your Characters?
I definitely create a sketch of all my characters before I start writing the novel. I need to know who they are, where they are from and what makes them tick. Although sometimes I feel the need to create new characters as the story takes on a life of its own.

As for the story outline, I have a general sense of the beginning, middle and end, but I leave room for flexibility to alter the storyline when inspiration comes calling.

I found myself occasionally interviewing my characters in the late hours of the night when my head hits the pillow. I may ask them questions about how they might react to a certain situation and then hope to memorize their answers by the next morning so that I can apply them to what I am working on.

Book Sample
Prologue: A Poet’s Lament
(From the novel, Poet Of The Wrong Generation)

Johnny Elias stared at the photograph with bittersweet regret. Four suntanned faces smiled back at him; a precious memory from the best day he could ever remember. The blazing sunshine. One enormous stage. Soaring music. Scores of people dressed in summer clothes lined up for miles on the Great Lawn. A perfect day when all was right with the world. If only life could again be so invigorating. So free.
The snapshot was date-stamped August 15th, 1991: the day Johnny had keenly anticipated that whole summer. His last college summer. A fleeting moment when life seemed full of endless possibilities. A time when a ballad was a three-minute escape into someone else’s melancholy. When friendships were real. When love was more than a crippling game of insincerity.
Johnny’s eyes momentarily broke away from the framed photo and over to a heap in the center of the room. Twelve cardboard boxes contained mementos of the last few tumultuous years. The framed gold records. The press clippings. The fan mail. He drew a heavy sigh then refocused on his own bronzed face in the picture. How young he looked at twenty-one. His hair thicker. His smiling green eyes without a trace of sadness. He was so naively happy. So very much in love with the young woman whose shoulders his arm was draped around. Ah, love… whatever that was.
Johnny spotted his CDs and vinyl records stacked haphazardly against a wall. The Beatles. Paul Simon. Bob Dylan. Jim Croce. Joni Mitchell. Elvis Costello. A plethora of songwriting legends, most of whom had reached their creative apex long before he was born. Back in 1991, this collection was Johnny’s only meaningful possession inside his tiny Brooklyn apartment – the address he departed from on that celebrated August morning en route to Central Park.
Suddenly, another wave of glorious memories came flooding back. Megan’s “borrowed” green blanket. A maze of revelers jockeying for prime position. The blistering sun setting perfectly behind the midtown skyline. The deafening roar of the crowd. A crowd in which he was just one anonymous voice, blending in, cheering on one of his boyhood heroes.
Anonymity, what a concept!
Of course, that was long before the impossible balancing act. The late night rehearsals. The early morning laryngitis. The amphetamine haze. The mounting expectations. The in-band politics. The covert enemies. The media bombardment. The endless demands.
Disillusionment.
Johnny’s eyes shifted to the right hand side of the treasured snapshot. Andy Raymer was squinting through his studious, horn-rimmed spectacles, a Cheshire-cat grin etched on his face. Andy: his loyal partner-in-crime. His Cobble Hill High compadre, and later the man who would manage the madness that became his career.
A pained expression spread across Johnny’s face. Damn! All that Andy had sacrificed! All those hours he sat in a lonely, cluttered guestroom, fanning the flames of his unlikely stardom. And for what? If only he had found a way to enjoy the ride… and the words of gratitude for everything Andy had done along the way.
It was on that brilliant summer day in the photograph when Andy improbably met the lovely woman to his left, Jacqui Spencer. Johnny smiled at the memory. The socially awkward Andy had never been much of a ladies-man. And yet look how comfortably he and Jacqui interacted, only hours after randomly meeting.
Jacqui: Johnny thought. Andy’s soul mate, but my own personal sounding board. In fact, his spiritual advisor too. His perspective provider, and of course, the artist whose album cover would help launch one of the most legendary debuts in pop music history.
Ah, but a short-lived career, Johnny reminded himself. More like a two-year whirlwind that saw him evolve from a directionless, novice poet to a national megastar in a drumbeat. From a one-room Brooklyn hovel to a doorman building overlooking Central Park. From dingy nightclubs to theatrical euphoria. It was breathtaking. His ultimate rock and roll daydream. And yet nothing like he could ever have envisioned. Nothing at all!
The last pair of eyes in the photo that Johnny's were drawn to belonged to Megan Price. Megan, Johnny sighed. Sweet, fragile, complicated Megan. The first girl he ever loved. The only one he ever loved. The woman who embraced him for who he was, who shaped his impression of loving stability – and whose haunting betrayal inspired the painful, creative storm that would evolve as the musical soundtrack of a generation. If only she had the courage to stand up for what mattered most, how different things would have been… for both of them!
Johnny fell back in an easy chair, clutching the framed photo, closing his eyes. He could feel the warmth of that bright summer day. A symphony of boom boxes echoed across the Great Lawn through the corridors of his mind. The smell of freshly cut grass and cold beer filled his sinuses. And suddenly the years melted away. He was twenty-one again, racing ahead of his friends, hoping to score a prime viewing location for the massive free concert.
Long before the boisterous cheers. Before his infamous fall from grace. Long before he understood the consequences of success, the agony of betrayal, or the origins of lyrics and melodies.
Long before he became poet of the wrong generation.

Buy Poet of the Wrong Generation On Amazon