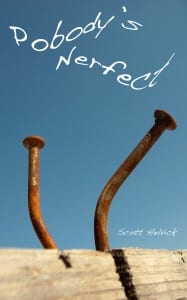 When I first got the idea to dig up nine years’ worth of my own blog posts, journal entries, handwritten notes, and miscellaneous Internet postings, I surmised that it would be relatively easy to compile the best ones into a decent-looking e-book.

As you can imagine, the only part that was “relatively easy” was the procrastination. After obsessively poring over and sorting nearly 900 pieces of writing, I came to the disappointing conclusion that very few, if any, of these pieces were good enough to pass through my filter for inclusion in the book. I was hoping to be able to glue them into a cohesive narrative detailing some of the most defining periods of growth in my life, but there just wasn’t enough substance behind many of those posts/entries/notes, especially the earlier ones, to allow me to write the story in the way I wanted to write it. I needed a new approach (or a new past).

That’s when the title hit me – Pobody’s Nerfect seemed, ironically, perfect. An account not only of my perpetually problematic perfectionistic proclivities, but also, self-referentially, of my struggles with those very same proclivities in writing this book.

Pobody’s Nerfect is a story of truth, above all else. It is also a story of my struggles with, among other things, love, spirituality, and intense personal growth throughout young adulthood. I certainly hope you will find it entertaining and inspiring, but I can promise only truth.

I never had any plans of becoming an author; it happened by accident. During my tumultuous teenage years, I discovered the therapeutic qualities of putting pen to paper (or, more commonly, hands to keyboard). Nine years later, in a stroke of genius/insanity, I came up with the idea to throw all of those writings into a cauldron and perform some incantations to see what would happen. The result was my first book, Pobody’s Nerfect!

Nowadays, I am living joyfully in Seattle in a big egalitarian house of eight people. When I’m not composing words of wisdom for the masses, I can probably be found working on my social enterprise/tech startup, participating in a contra or swing dance, or doing the dishes. Never content to rest on my laurels, I am constantly reevaluating my reasons for existing on this strange planet and fine-tuning my ambitions to line up with those reasons. My fledgling startup, called Synthebliss, will be a major part of that – even if I’m not always sure exactly how.