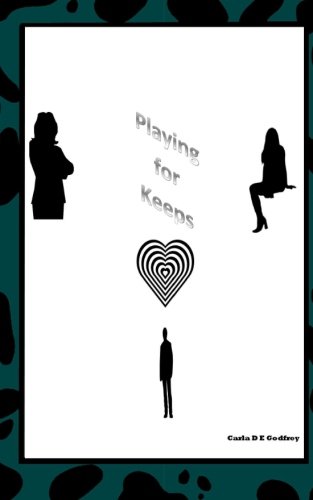 Boy meets Girl; Boy falls in love with girl…Or does he?

The Boy: Playboy Mark St James has it all; wealth, charm, and luxury. He hasn’t been doing too badly in his personal life either; for the past couple of years he’s been dating someone nearly twenty years older than himself, there’s nothing in it though; it’s just a bit of fun, that’s the mutual feeling between them anyway. However when his parents worry that he’s not mature enough to inherit his fortune and the family business, they decide to test his potential by setting him up with a girl from a respectable family and Mark is nowhere near prepared for the emotional havoc and turmoil that is to follow; particularly when the girl’s family is a little too close to home.

The Girl: Siobhan’s sure that she’s met “the one” when she’s introduced to Mark, however she soon discovers that this potential romance may not be as idyllic as she’d hoped.

The…Woman? Thirty-eight year old Christine is a successful business woman and single – At least, that’s what her family thinks. For the past few years she’s managed to keep her family and her personal life separate. However that could all change when her sister and brother-in-law set her niece up with the last person she expects…Or wants!

What Inspired You to Write Your Book?
I’ve always done a typical boy meets girl sort of story and there tends to be a lot of taboo about relationships between people with a big age gap so I thought that the time had come to shake things up a little bit and turn my storyline into a novelty by creating a controversial relationship.

How Did You Come up With Your Characters?
I wanted my main character to be unashamed of who she was and who she was with because, at the end of the day, age is just a number; but I also didn’t want it to be plain sailing so I created an upper-class, traditional background for the leading young male character which would cause him to be.. not ashamed exactly.. but feel he couldn’t go public which would created tension and make them more interesting. I loved the idea of the seductress who was determined not to let him go and the young man who wanted to do the right thing and knew that he was playing with fire and was exasperated with the whole set up but, at the same time, couldn’t resist her and that’s not being weak; because of his background, I didn’t want him to be too open and free with his emotions.

Book Sample
He didn’t love her, of that he was certain. It seemed to be merely intense admiration that a woman of thirty-six could retain her slender figure. At twenty-two, he knew that people would think him capable of fancying anything. Yet it wasn’t just that, he enjoyed the dynamic they shared, the escapism from his everyday life. Each time he tried to picture a scenario where he put an end to things, they couldn’t carry on, yet every time he saw her, his will would weaken and as she approached him, he knew that all he had to do was to get one whiff of her perfume and he was all hers. He wasn’t gullible; he knew that she was a temptress who enjoyed getting what she wanted. He was completely at her mercy, her slave almost… Just as she liked it; and, he knew full well, just as HE did too.

About the Author:
Carla started writing when she was very young and hasn’t stopped since. She loves reading and thinking up her next novel. Her favourite categories are contemporary woman’s fiction and period drama.