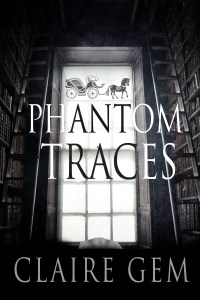 A history professor in a tweed jacket, a cheeky Goth chick, and a pipe-smoking, book-hurling ghost. Put them all together in an antiquated library and, well…

Professor Jack Wood’s silver-streaked hair definitely ages him, and he can thank Killer Dawn for that. He won’t be falling into the love trap again anytime real soon. But this new librarian has him curious, with her head-to-toe black Goth garb, piercings, and a defiant attitude to match. Definitely not his type of girl, but still…

Abigail Stryker’s got her work cut out for her. The last two librarians didn’t last a month before airborne books chased them off. But Abby’s determined to make her new life a go – and to stay as far away from older men as possible. Once was enough. Might be tough to do when the library’s best patron is none other than dreamy-eyed Jack Wood. And it seems the eccentric ghost may have taken a shine to her as well.

What Inspired You to Write Your Book?
Always fascinated by the paranormal, I wrote Phantom Traces because I love a good romance, and I love a scary ghost story. Few books out there fit into this niche, so I thought I’d write one. Also, libraries are my favorite places to hang out, so this book takes place in, and was born – literally – in a library. I wrote the first two chapters in one day sitting in a local library.

How Did You Come up With Your Characters?
Abigail Stryker popped into my head, introduced herself, and told me her story. Most people call this mental illness: I prefer the title of “creative.” I searched Depositphotos until I found her picture, bought it, and posted it on my desktop. Then I opened a Word Doc and wrote her backstory.
Jack Wood was a little harder to find. I googled “history professor,” “teacher in a tweed jacket,” “older teacher,” and similar terms ad nauseum until I finally found Jack’s picture, too, on Depostphoto.
I’m a visual learner. I need my characters’ images staring at me from my desktop to inspire me as I write.

Book Sample
“Age does not protect you from love. But love, to some extent, protects you from age.”—Jeanne Moreau
One
Abigail Stryker heard all the rumors about the pipe-smoking, book-hurling ghost who chased off Harvey Library’s last two librarians. She took the job anyway.
The first, Liz Carter, resigned down at city hall sporting a golf ball-sized lump on the side of her head. She suffered a whack from War and Peace, the unabridged copy. A few weeks later her successor, Norma Porter, abandoned her post on a chilly spring evening. A group of students from the community college were on their way in to work on term papers when they heard a scream. The door burst open, and Norma raced past them—almost through them—jowls and flaccid arms flapping as if the place was on fire.
Abby walked the block and a half from her apartment just before nine a.m. on her first morning as the Harvey’s new head librarian. No one else was stirring in Caldwell, North Carolina. A beautiful April morning, the square was still hushed, sleepy under the hazy chill that habitually settled over the Blue Ridge foothills.
So this is small town life. Huh. A bit of a change from the busy college town where I grew up.
After what happened, she wasn’t ready to be completely on her own, though she hated to admit it. Her Aunt Dianne just happened to have an empty efficiency over her shop on Main Street. Just up the street from the library.
Perfect.
So, Abby might have to deal with a restless spirit. He couldn’t possibly be as unsettled as she was, so it really didn’t matter. She needed a new start, and the Harvey Library seemed the perfect choice. Away from Boone, away from the memories, away from her parents and their “helpful” connections.
She suspected this ghost was nothing more than the fabrication of a town mourning Dana Laramy’s retirement. After running the place for almost thirty years, she’d become as permanent a fixture as the old school bell mounted in the lobby. There were no reports of any abnormal activity until the day she left. After that, talk surfaced about closing the Harvey Library permanently.
Abby crossed the empty street at the corner near Murphy’s diner and covered the remaining half-block with a bounce in her step. Okay, so she was a little nervous, but she decided to channel it into something more positive—excitement. After all, this was her new beginning.