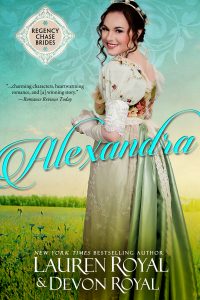 England, 1815: Lady Alexandra Chase has always liked being the perfect daughter, thank you very much. Why would she bother chafing against society’s restrictions when instead she could be basking in the warm glow of its approval? But when her brother’s best friend—and secret obsession—returns from a long spell abroad, she begins losing interest in the suitable young lord she’s expected to marry. Suddenly, family duty and a flawless reputation seem less important than the chance, however slight, that her girlhood crush might notice her now that she’s all grown up…

Tristan Nesbitt has done some growing up himself over the last few years, what with moving across oceans, inheriting a title, and facing a devastating scandal. But through it all, he’s never forgotten the Chases, the closest thing he had to a family back in his school days. When his old friend Griffin Chase requests a favor, he’s happy to oblige, as long as he can maintain enough distance from the family that his infamous past won’t tarnish their good name. Unfortunately, one Chase seems intent on getting much closer to him than she should…

About the Author
LAUREN ROYAL decided to become a writer in the third grade, after winning a "Why My Mother is the Greatest" essay contest. Now she's a New York Times and USA Today bestselling author of humorous historical romance novels. Lauren lives in Southern California with her family and their constantly shedding cat. She still thinks her mother is the greatest.

DEVON ROYAL is the daughter of romance novelist Lauren Royal. After attending film school, she wrote an award-winning TV comedy pilot and spent several years working in digital video production before turning her focus to fiction writing. Devon lives in Southern California with her fiancé. She also thinks her mother is the greatest.