You are here: Home / Fiction / Mystery/Suspense / Peril by Ponytail by Nancy J. Cohen 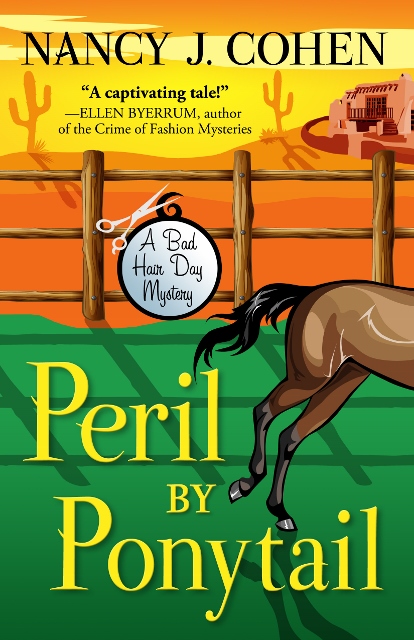 Hoping for a romantic honeymoon at an Arizona dude ranch, hairstylist Marla Vail and her husband Dalton arrive to find a series of mishaps plaguing the resort. A nearby ghost town is suffering similar problems. Is it mere coincidence that Dalton’s Uncle Raymond owns both properties? When Raymond asks for their help in finding the culprit, Marla and Dalton eagerly accept. Then news of a local forest ranger’s death raises the stakes.

With sleuthing more natural to Marla than horseback riding, she delves into the investigation. But as she digs deeper, she discovers skeletons in the family closet. Someone means to drive Raymond out of business, and the reason may be linked to his past misdeeds. Raymond isn’t the only one with secrets. The trail leads Marla from an environmental activist group to saguaro poachers to water rights proponents to an abandoned copper mine beneath the ghost town. She’d better saddle up, rein in the clues, and find the killer before she becomes the next spirit inhabiting the haunted hillside.

In this explosive tale of murder and mayhem, buried secrets surface and threaten to tear Marla’s new family apart. As the bodies pile up, Marla races to find proof that Dalton’s uncle is innocent. Or is he more involved than he wants them to believe? This adventurous mystery will have you turning pages while wondering how well you truly know your relatives.

“Peril by Ponytail ropes in the reader in Nancy J. Cohen’s captivating new tale, which deftly braids together deadly secrets under the sand, long hidden resentments, and romance on the range.”—Ellen Byerrum, Author of the Crime of Fashion Mysteries

“Another winner from talented author Nancy J. Cohen. Saddle up and come along for a great read!”—Maggie Toussaint, author of the Dreamwalker Mysteries

What Inspired You to Write Your Book?
I'd always wanted to visit a dude ranch, and this story gave me the chance. I sent my characters, Marla and Dalton Vail, to an Arizona dude ranch for their honeymoon. They've been invited to stay with Dalton's extended family, and soon Marla and her new husband are embroiled in a murder case. I went on many of the adventures that followed for my fictional couple, including staying at a haunted hotel, exploring an underground copper mine, visiting a cavern, stopping off to view the breathtaking cliffs at Sedona, and much more. I also learned a lot about the region's history and issues that played a part in the story. This tale was a joy to write.

How Did You Come up With Your Characters?
Hairstylist Marla Vail, recently married to her second husband who is a homicide detective, is eager to meet his relatives who live in Arizona. She doesn't count on Dalton being swept into a murder investigation while there, or his uncle claiming somebody is sabotaging a nearby ghost town undergoing renovations. Who might hold a grudge against Uncle Ray? It wasn't hard to find suspects or motives and build the mystery from there. All families have secrets, and Dalton's clan is no exception.

Book Sample
Her nose picked up the distinct aroma of smoke. Did her ears deceive her, or could she hear a crackling noise?

“Dalton, wake up.” A coughing fit overwhelmed her as she nudged her husband.

He roused slowly. “What is it?”

“I smell smoke, and it’s foggy in here.” Her throat constricted, and her head pounded.

Dalton threw off the covers. “You’re right. It’s denser near the bathroom. Let’s go out through the sliding glass doors. Hurry! Who knows how long we’ve been exposed to the smoke?”

Marla slapped a hand to her mouth and nose. She wasn’t leaving without her purse. After grabbing the wrap lying at the foot of their bed and her handbag from the night stand, she lurched toward the patio exit. Dalton had opened the drapes and stood fumbling with the lock.

In the next instant, he shoved her outside, and clear, fresh air filled her lungs. When she regained her senses, she realized the awful truth—someone must have set fire to their casita.

Buy Peril by Ponytail On Amazon