You are here: Home / Fiction / Payback by Mar Preston 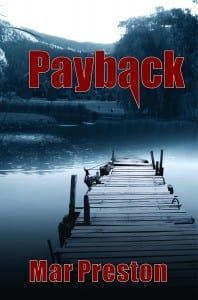 A forest fire burning in the mountains surrounding a remote California village interrupts the Oktoberfest celebration, followed by the discovery of the mayor who has been beheaded. Sheriff’s Detective Dex Stafford concludes everybody hated the mayor for different and very good reasons, but nobody will talk. His nerves fraying, Stafford finds himself involved with his partner’s hysterical daughter, at a time when he fears his partner is on the take. His mother moves in with him, bringing a Jack Russell who hates him, and stories about his father he doesn’t want to hear.

Patrol Officer Holly Seabright of the village’s security force becomes a prickly ally in uncovering the hints and whispers of something much worse than the murder of the mayor. Stafford pools resources with the attractive and smart patrol officer on a twisted trail of discovery as winter and the big snows shut down the town. A killer beyond his imagining haunts the town. Sometime soon, unless he can stop it, there will be another death, and then still another.

How is Writing In Your Genre Different from Others?
I don’t see much stuff like mine. I’d love to read some though. I’ve been told I have a nasty wit and a sharp tongue. I can’t help noticing mean things people do to each other.

What Advice Would You Give Aspiring Writers?
Apply the seat of pants to your writing chair for long periods of time and don’t give up.

Author Bio:
I am the author of No Dice and Rip-Off, featuring Detective Dave Mason of the Santa Monica Police Department and his girlfriend Ginger McNair, a community activist. She was a long-time Santa Monica activist and divides her time between Santa Monica and the peaceful mountain village that is somewhat like the setting of Payback. However, only nice people live there.

Over the years I’ve been a habitual do-gooder in local good causes, particularly the SPCA.

What Inspired You to Write Your Book?
I’ve always been entertained observing the public and private face of local politicians in the California mountain village where I live. You’ve never seen such puffed up, inflated egos, imagining themselves as power brokers in the village bar. Ah, the strut and swagger.

That’s what I wanted to write about. I also wanted to tell the stories of the people that make the village work, the guys in maintenance and at the dump site, the patrol officers, the road crew, and the waitresses in the Bistro.