You are here: Home / Fiction / Patches of Grey by Roy L. Pickering Jr. 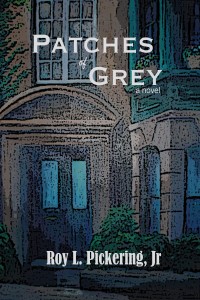 Tony Johnson is a studious young man planning to soon graduate from much more than high school. Although his zip code places him in a Bronx tenement pre “rise of Obama”, his sights are set far beyond the trappings of a humble upbringing. Collegiate dreams combined with falling in love with a white classmate put him strongly at odds with his father. He incurs Lionel Johnson’s wrath for the sins of ambition and daring to be with Janet Mitchell. Seeing unrealized goals reincarnated in the eyes of his eldest son remind Lionel of what once could have been, and of what went wrong. His own upbringing in a segregated town established a bitter, prejudiced outlook that is the only legacy he has to pass down to his children. When his job and role as primary breadwinner are lost, Lionel’s authority erodes and he drowns disappointment one drink at a time. This affords Tony an opportunity to assert independence rather than allowing history to repeat itself and his fate to be set by chance and circumstance. Throughout the course of a tumultuous year, Tony comes to learn that the world is not as black and white as he and his father’s opposing mindsets would suggest.

What Inspired You to Write Your Book?
Race relations has always been of strong interest to me, particularly as they transition from the previous generation of segregation and Jim Crow to the post Civil Rights movement era where much has changed for the better, but old prejudices still linger and resentment simmers on each side of the divide.

How Did You Come up With Your Characters?
I envision stories through the gifts of imagination and creativity. As for the characters who populate them, they seem to give birth to themselves as I go through the hard work of putting pen to paper.

About the Author:
Roy Pickering’s debut novel Patches of Grey has been kindly reviewed and earned a B.R.A.G. Medallion award. His novella Feeding the Squirrels is published by SynergEbooks exclusively in ebook formats. Roy’s short stories can be found in various print and online venues, including anthologies such as Proverbs for the People (Kensington Books), Role Call (Third World Press), The Game: Short Stories About the Life (Triple Crown Publications), Prose to be Read Aloud: Volume One, Ménage à 20: Tales with a Hook, Forever Travels, and IAI Short Story Compilation. He blogs at A Line A Day http://lineaday.blogspot.com and keeps readers up to date at RoyPickering.net. Roy also enjoys book talk at Goodreads, Twitter and facebook. Recently he completed his second novel – Matters of Convenience. Currently Roy is collaborating with his wife on a children’s book series.