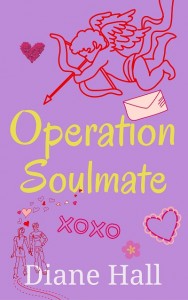 When psychic medium and semi-recluse, Geraldine Stanley, realises that she’s still single just three months before her thirtieth birthday, she agrees to allow her flatmate, top relationship coach, Ben Wright, to coach her into meeting the man of her dreams. She’s sure that with his much talked about skills as the country’s most celebrated love-coach, he’ll effortlessly guide her into the perfect love-match. But Ben has never seen a twin-flame checklist before, and Geraldine is unwilling to settle for anything less than the other half of her soul. Geraldine is quickly caught up in a whirlwind of supervised dating assignments, but only her past life regression therapist, a restless ghost, and a collection of psychic friends know the real reason she has never found ‘the one’. A metaphysical rollercoaster ride, full of modern humour, spiritual teaching, and philosophical questioning.

What Inspired You to Write Your Book?
I was inspired to write this book as a result of having a huge crush on someone. It seems ridiculous now, but that’s basically what happened. I met him while I was in Cyprus for a few months, and as soon as we met, there was an instant connection. All kinds of synchronicity seemed to appear throughout every meeting between us, and I remember that for ages I was convinced he was my twin flame. But I was called away by some family matters back home in London, and didn’t really have a chance to develop things further. I think it was during a subsequent visit, possibly years later, that he happened to mention that a friend of his was thinking of renting her house out, and he was thinking of moving in… might I be interest in a house share!???!! Well, at the time, I think I’d also been hoping (purely by chance you understand) to move to the exact location of the house, (okay, and to the town he lived in – in a totally non-stalker-ish way of course!) and it all just sounded amazing, However, it never happened. But the idea of flat mates, destiny and twin flames all somehow came together in my mind and sparked my imagination in a really exciting way. The idea of not being able to see something that’s right under your nose. The complexity of twin flame relationships, and the energies around them – helpful or unhelpful. Karmic ties, past lives, the vagaries of dating for the spiritually minded person. And that was it: Ben and Geraldine were born.

How Did You Come up With Your Characters?
They just sort of found me somehow. I knew they both had to be hot, modern, driven, but also deeply sensitive and caring. Just two very good and kind people, who were determined to make a difference in the world. Wounded healers who’d had a bit of a rough time in relationships, and desperately wanted to heal that pain in others.
The rest was inspiration, listening and laughing as they shared their story with me.

Twin Flame Checklist
• Sense of familiarity, as if you’ve always known each other
• Similar tastes in aesthetics, clothes, people and food.
• You have similar beliefs and share an interest in similar causes. You are here on the same Divine mission and work for the benefit of humanity in similar or complementary ways.
• Telepathy and deep empathy: feeling as if you each, always know what the other person is thinking and how they’re feeling.
• You may have difficulties to overcome, for example, you might be from different backgrounds or belong to difference races and have your love tested through having to prove how willing you are to overcome barriers in order to be together. Or there might be deep, emotional issues to work through from a long karmic history you both share, as a result of several lifetimes together.
• You have a natural affinity and might even look alike. Even if you are from different backgrounds and look very different, there will be a clear similarity in your expressions, smiles, ways of speaking, levels of intelligence and discernment i.e. how you show up in the world, almost as if you’re both from the same, mysterious planet.
• You seem to have been brought together by coincidences, hunches or, even, Divine intervention. Your meeting seems fated and inevitable and the universe seems to have endlessly conspired to bring you together.
• You may, each, have a feeling that you would do almost anything to see the other person happy, even if it meant losing them to someone else
• When you argue, you always know that you have both grown and evolved as a result
• You are best friends and the most passionate lovers all rolled into one
• You know that you could easily spend the rest of your lives loving each other
• Whatever temptations, threats and doubts might come your way, even through disagreements and fall-outs, the strength of your eternal connection lets you both know that, in the end, when all is said and done, there is simply no one else you could possibly belong with.
• When you’re with them, it’s like coming home