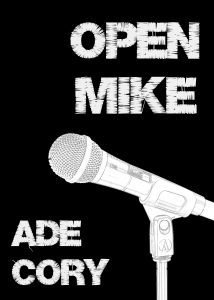 A story of love, moosic and a number of pigs.

Mike Grimshaw runs the local grocery shop in the quiet Suffolk village of Peasenhall. While the eccentric nuances of rural life spin around him, Mike manages to stay sane by playing guitar at amateur Open Mic nights in his local pub, The Whipped Peasant. When Mike finds love with Jules, the resident midwife, he appears to finally have some control over his life. However, the close attentions of the pub’s award-winning French chef, and the ongoing battle for Open Mic supremacy between The Whipped Peasant and its close neighbour, The Startled Goose, ensure Mike’s troubles are far from over.

All, however, will be decided in the dramatic Battle of the Pubs finale.

What Inspired You to Write Your Book?
Busking, open mic nights and playing the guitar are true passions of mine, and my involvement in wine and song across Suffolk was the inspiration for this satirical tale.

How Did You Come up With Your Characters?
Visiting the various Suffolk pubs on open mic night, I’ve always relished the opportunity to meet the myriad of quirky characters that grace the local music scene, and experience the boundless eccentricities of Suffolk life. This book celebrates them in all of their weird glory, along with references to songs, films and foodstuffs that will appeal to everyone.

Book Sample
Mike crashed through the front door carrying a small box.
“I just thought I’d drop off a steak slice or two,” he said and stared at the congregation of expectant mothers, each red-faced, flustered and constantly shifting their extended midriffs into more comfortable positions.
“Looks like the enemy has just arrived,” one of the pregnant mothers said abrasively.
Jules stood silently staring at Mike.
“This is supposed to be my speciality…this is what I do…bring groceries.”
A few women huffed derisively at the comment. Jules just stood.
“Look,” Mike said, “I’ve had a very big day in the shop…a very big day. And I just wanted to share it with my best girl. I miss my best girl.” Jules looked puzzled, unsure.
“You complete me,” said Mike.
Jules didn’t blink.
“I’ve sold a boatload of bread and tuna and whipped cream and I just wanted you…”
“Shut up!” Jules suddenly cut Mike off. “Just shut up,” she said. “You had me at steak slice.”

Jules woke from the deepest slumber and decided today was moving day.

Mike Grimshaw was so engrossed in his Jodi Picoult novel that he didn’t notice Jules enter the shop. She drifted around the pasty section of the chiller cabinet, quietly whistling the tune to the latest Santander commercial, glancing across every few seconds to see if she could catch Mike’s eye. The shopkeeper finished the chapter he was reading then looked up just as Jules disappeared behind an aisle end of locally-produced flapjack. He took a moment to scratch under his left armpit and returned to Zoe Baxter’s blossoming lesbian romance.
“What are you reading, Mike?”
Mike’s head snapped back up again, suddenly startled by the voice. The question appeared to be coming from a batch of marginally out-of-date Piri-Piri Chicken Pot Noodle. “It’s called…er…Sing You Home,” he replied, holding up the book’s front cover towards the dehydrated snack.
“Ooh, yeah, that’s great,” said the Pot Noodle. “I’ve read lots of hers.”
“Have you now? Good for you.” Mike straightened up from his hunched position over the counter and tried to remember what he’d eaten for breakfast. He wondered if any part of his chocolate brioche was mildly hallucinogenic. He certainly didn’t recall seeing any advisory notes on the packet. The Lancashire man pressed a palm to his forehead and felt for any discernible elevation in temperature. He mumbled quietly under his breath, “I need a holiday…can’t believe I’m talking to a Pot Noodle.”
“It’s me, silly!” Jules laughed as she popped her head around the aisle corner and blew a draught of air up from an extended bottom lip to remove a few strands of excessive fringe out of her eyes.
“Oh, hi Jules,” said Mike, visibly relieved that his sanity was still intact. “What’s up?” he said, furtively tucking his Mr Greedy bookmark between paused pages.
“Hmm,” said Jules wistfully. “I need something for tea, and probably some fruit to keep me going this afternoon.”