You are here: Home / Fiction / Romance / One Night in Reno by Rogenna Brewer @Rogenna 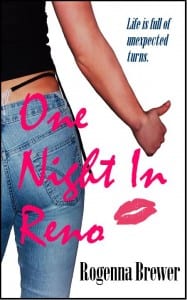 Life is full of unexpected turns…

Jenny Albright’s gas tank runs as dry as her luck in the Nevada desert. Then Navy SEAL Garrett “Itch” Erickson swoops in to rescue her, her young son and their beagle pup. Although the stranded single mom is reluctant to accept help from a stranger, befriending the Good Samaritan SEAL might be the best decision Jenny’s made in the past seventy-two hours.

Whether Jenny is a victim of circumstance or a woman on the run, Garrett sees his past in her son’s future and it doesn’t look good. But does his offer to marry Jenny—until she lands on her feet—come from a sense of duty or the need to be rescued himself?

How is Writing In Your Genre Different from Others?
I started writing military heroes and heroines shortly after I got out of the service and settled into being a Navy Wife, and long before it was trendy.

What Advice Would You Give Aspiring Writers?
“The way to get started is to quit talking and begin doing” ~ Walt Disney

Author Bio:
When an aptitude test labeled her suited for librarian or clergy, Rogenna Brewer joined the Navy. Ever the rebel, she landed in the chaplain’s office where duties included operating the base library. She’s served Navy, Coast Guard and Marine Corps personnel in such exotic locales as Midway Island and the Pentagon. Navy SEALs are among her favorite heroes, but not the only military and civilian heroes and heroines this romance author chooses to write about.

“From Navy Vet to Romance Novelist. Not just a job, thirteen years of Navy SEAL research.”

What Inspired You to Write Your Book?
One night our beagle puppy climbed a dresser to get a bottle of Motrin. I had $6.21 to my name. My husband was at work. I was stranded at home and couldn’t find an open emergency vet that was willing to take her without payment upfront.
Until I could get her to our vet the next morning, I called poison control and googled–and because my two dogs wouldn’t go to bed until I did–I stayed up with her all night. While she ate grass and vomited, I sat at the kitchen table with the back door open and wrote about a Navy SEAL coming to the rescue.
Ruby made it though the night and we had thirteen adventurous years together.