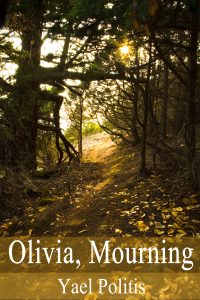 Olivia wants the 80 acres in far off Michigan that her father left to whichever of his offspring wants to stake a claim. As Olivia says, “I’m sprung off him just as much as Avis or Tobey.”
The problem: she’s seventeen, female, and it’s 1841.
Mourning Free knows how to run a farm and Olivia has complete trust in him.
The problem: he’s the orphaned son of runaway slaves and reluctant to travel and work with a white girl. He especially fears the slave catchers who patrol the free states, hunting fugitive slaves.
Not without qualms, they set off together. All goes well, despite the drudgery of survival in an isolated log cabin. Incapable of acknowledging her feelings for Mourning, Olivia thinks her biggest problem is her unrequited romantic interest in their young, single neighbor.
Then her world falls apart.
Strong-willed, vulnerable, and compassionate, Olivia is a compelling protagonist on a journey to find a way to do the right thing in a world in which so much is wrong.

What Inspired You to Write Your Book?
I enjoy exploring another time and place. When writers are told "only write what you know" I would change that advice to "write about something you'd love to learn about." I had also become preoccupied by my belated realization of how vulnerable we all are, how life can change in an instance.

How Did You Come up With Your Characters?
I never really knew my great-grandmother, who died when I was five or six, but I read and heard a lot of stories about her. She had a tough life – orphaned at an early age, married to a not abusive but harsh man who was not a great provider, and then a penniless widow. She found a number of ways to support herself, among them producing the Greenstreet Paper Dolls with her sister. Obviously, the details of her life were not like Olivia's, but it was my image of her I had in mind when I wrote about Olivia.