You are here: Home / Fiction / Mystery/Suspense / Oink. A Food for Thought Mystery by J. L. Newton 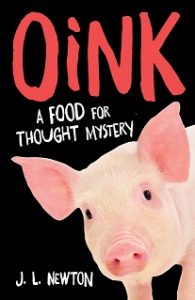 Emily Addams, foodie professor of women’s studies at Arbor State, finds herself an unlikely suspect in the poisoning of a man she barely knows—Professor Peter Elliott of Plant Biology, the hot shot developer of a new genetically engineered corn. How did her cornbread end up in his hand as he lay on the smelly muck of the university’s historic hog yard? In a quest to find the real culprit, Emily and her network discover some of the dark secrets of a university that is itself tainted by an increasing focus on greed and profit.

A satiric novel about the struggle between communal and market forces in academia—and, by implication, the globe— Oink is a reminder of why community belongs at the heart of human life. Oink, winner of a Book Excellence Award in Humor and finalist in the Chanticleer Murder & Mayhem Awards, comes with recipes.

What Inspired You to Write Your Book?
Real life events. In the 1990s budget cuts to the UC system promoted an
ever-greater focus on profit at my university. Small programs like women's and ethnic studies were threatened with defunding but they banded together and saved their programs. The book is a humorous send-up of the university for the greed and self-interest that was becoming more common and a reminder that community and a sense of common cause are essential to a decent human life.

How Did You Come up With Your Characters?
Ha, well, I used a version of myself as the sleuth and also drew upon people I knew at the university for most of the other characters. Some characters are combinations of many people. I made up the villain. He's just a combination of the values I wanted to critique–greed, narcisscism, womanizing, and self-interest.

Book Sample
Chapter 1
October 11, 1999
I’d dressed carefully that morning for the coffee date I’d agreed to in the afternoon—a silky dark green skirt, a thin white blouse, and malachite earrings, which gave my eyes a greenish cast. It was important about the eyes because my hair, as usual, hung straight to the middle of my neck. It had pretended to obey the curling iron at home, then slyly unfurled itself as soon as I stepped outside. I’d been divorced for two years, and though I’d dated several men, I hadn’t yet found another with whom to share my life. My daughter, Polly, formed the heart of my existence, but I missed the third component of a family—not Solomon, God knows, my cantankerous, and cheating, ex-husband—but someone to take the role that he had filled—a partner for myself. Two weeks ago, I’d placed a personal ad in the Valley Bee describing myself as “an academic, early forties, bright and good looking, the mother of a ten-year-old daughter, and the owner of a large, marginally trained dog.” What I did not put down was that my field of work was women’s studies. That often put men off and could wait until potential suitors met me.
I’d received several responses, one from a man with a teenage boy. “Talk about the marginally trained,” he’d written. But, uneasy about meeting men I’d never seen, the only one I’d answered was from a colleague at my university—Wilmer Crane, professor of Mathematics. I’d never dated a mathematician before, preferring men whose work I could actually understand, but a colleague, even in math, attracted me. As a member of my own community, he seemed familiar and somehow safe.
I enjoyed my solitary walk down Lupine Avenue and the pleasing views it gave me of the lawns and pathways between the grey stone buildings of the university. Taking a bite of the corn and cherry scone I’d bought for breakfast—it was part of my new research on food to make and sample recipes involving corn—I watched a grey fat squirrel dart after an even fatter one up the trunk of an acacia. Finches chattered in high tweeting sounds, two skipper butterflies fluttered orange and brown above the lawn, and the air, already warm against my skin, smelled pleasantly of new-mown grass. I was fond of this campus, which had the well-earned reputation of being an easy-going place, where people were smart but not pretentious. Perhaps a legacy of its agricultural past—when students had come to study plants and pigs and cows—Arbor State had struck me, when I’d first arrived, as unusually communal and humane.
In the last few years, however, as the university sank more of its resources into research on new technologies, as it became more beholden to corporate funding, and less supported by the state, the outlook for small programs like my own had darkened. Several rounds of budget cuts, indeed, and the arrival of a new Vice Provost had begun to make such programs look expendable. And now a new move to split the College of Letters and Sciences into three distinctive units had thrown the fate of Women’s Studies into further question. The proposed separation into science, social science, and humanities was fine for discipline-based departments like English and Sociology, but the women’s and ethnic studies programs were interdisciplinary. Where were they supposed to go? That the new Vice Provost had called a meeting that very day “to discuss the programs’ fates” filled me with a sense of dread.

Buy Oink. A Food for Thought Mystery On Amazon