You are here: Home / Fiction / Fantasy / Off to See the Wizard by Clay Johnson 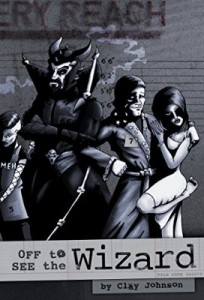 At the end of most heroic quests, after a plucky band of heroes has averted the apocalypse, all is well, and everyone lives happily ever after… (until the next book in the series.)

Now, for the first time, readers get an in-depth look into what really happens after the quest. This is the collected case file of the Grand Inquisitor’s investigation into the Misery Reach debacle. Read first hand as the participants try to explain their actions and make their case. Did the Demon Lord Krevassius really try to end the world just to impress a girl? Would everyone be better off if the Wizard Galbraith hadn’t invented a quest in order to stave off criticism? And what about an elf queen peeing on a Minotaur? A swordsman’s losing battle with a young raccoon? And the transvestite assassin with a heart of gold?

This is a fast,  funny, and NSFW novel told by an intercutting set of narrators.  It’s for anyone who loves an epic hero quest, but is also annoyed by the conventions of the fantasy genre. Think, World War Z meets The Office, meets Lord of the Rings.

What Inspired You to Write Your Book?
I got into the sword of truth series, which was slow going, at first, but once I got past the first little bit I was hooked along for the ride. It kicked off an extended streak of epic fantasy novels, and toward the end of the experience, when I was finally quitting midway more often than finishing a book, I found myself thoroughly annoyed at the names the characters were given. It never should have irritated me as much as it did, and probably wouldn’t have if not for the fact that I read so many in a single month. In any case, I thought to myself, Jesus, why isn’t there ever just the great swordsman Harvey? With that, the wheels started turning and I began the book.

How Did You Come up With Your Characters?
A lot of the characters started as very simple ideas, or single lines I wanted them to say, and they grew from there. For instance, the Wizard Galbraith started as only his list of rules for a wizard’s quest. The rest started to fill in from the other characters statements about him before he appeared, which were mostly off the cuff anyway. Most of my first drafts tend to be stream of conscious writing, characters included.

Testimony of Galbraith, the Wizard:

Testimony of Harvey, the greatest swordsman in the world:

I believe my father wanted me bullied. I think the endless harassment was his goal. I can think of no other reason one might name a child Harvey. Especially when he wanted me to be a swordsman. That much was obvious from the start. I was never meant to be a musician. I was never destined to awe or astound with naught but my voice and a lute. He’d been putting sharp edged instruments of varying sizes in my hands from the moment I first had the strength to grip them. But a man who knows he wants his kid to be a swordsman, also knows that swordsmen need names like Kartoth, or Strom, or Dakathor. Not Harvey.
You’re the Inquisitor General, so you have to have traveled, yes? I’ve traveled all over the place and I’m still trying to figure out what the hell a Harvey is. I’ve never met another Harvey, never even heard of one. Have you? Either of you? I’ve met plenty of Stroms. I’ve killed four of them. I once fought two Dakathors at once using a pen knife. I disarmed one of them with it, and I used his blade to kill them both. I dispatched a Kartoth with a very unripe banana. But I’ve still not met a Harvey. Not as a swordsman, or as a knight. And not as anything else. I thought maybe it was the sort of name you find on a blacksmith, or a stable hand. Eventually, I started hoping I’d at least find a latrine scrubber called Harvey, because that would explain why anyone who heard my name tried to take a knife to me.
But I think it’s just the name. A guy hears “Harvey, the greatest swordsman in the world,” and he wants to giggle. Or he wants to kill the Harvey for making him giggle. Because violent men do not giggle. It’s unbecoming.
Life was bad there for a while. Because there are a lot of bullies. Especially when you’re five. And there are a lot of places that don’t allow swords. Especially when you’re five. But all of the places that don’t allow swords still allow bullies. In order to survive, I had to learn to use anything at hand as a weapon.
I’m sure that was Dad’s plan, along with a bit of sadism mixed in. He never seemed to like me the way he did my shiftless younger brother. But mostly he wanted to make sure I never relaxed. He wanted me always prepared to disable someone with a head of cabbage, or a spoon. Though, I have no idea why.
Don’t rush me. Please. I’ll get to it. I just want you to understand that a lot of what happened on the wizard’s quest had to do with my name, in one way or another. Maybe not directly, but almost every poor decision I made can be traced back to what seems like a bottomless set of insecurities that all originate with my name. For instance, that terrible lava through the village incident. All because of a pissing contest between me and Galbraith. Galbraith. Now there’s a name. Man!
Ok, so where was I? Oh, right, the joust.

Testimony of Krevassius, Demon Lord of the Misery Reach, continued…

This is off the record, correct? Well, of course, it’s obviously on record. I can see your assistant here and his diligent note taking. But is it a public record? You aren’t planning to tack it to notice boards across the realms, or alert the town crier, or… share all the juicy details over a pint at the tavern?
Ok, so…
Um…
I never set out to destroy the world. There’s no profit in it. If you wipe out everyone else, then you end up scrubbing your own toilets. I don’t want that. I hate scrubbing toilets.
I know that when taken as a whole, the course the curse took makes it seem as if I was trying to accomplish mass scale annihilation. But the apocalypse was not my intention. Well, no, it was I… I suppose. But not the way you think. Give me a moment; I’m making a mess of this.
Alright.
Look:
There was this woman…

Testimony of the Sorceress Nestra:

Everyone I know assumes I was sentenced here. I am viewed as one of them. So, when I’m calm enough to sit back and see it through their eyes, I can understand why Krevassius might have chosen to woo me the way he did.
He could have done something as simple as giving me flowers, though, because I like flowers as much as the next girl. More, really, when you consider that I live in the Misery Reach. But once a person starts down the road of overwhelming displays of power it’s nearly impossible to step it back to something as simple as bouquets and chocolates.

Testimony of Illena Borovcheck, seamstress and girlfriend (of the wizard), continued…

My sister? Yeah, she’s a bitch.
Hey, like, I’m not trying to be uncharitable here, or anything, but do you have any idea what the holidays are like at my parents’ cottage? She skinned a guy alive. With her mind. She shucked him like an ear of corn and got sent packing to the Misery Reach.
Me, of course, I’m the whore; don’t ask about me. But, like, when my father talks about his, perfect little angel he’s still like, all, “I’ve got a daughter went to the university.”
She skinned a guy alive! And she started the end of the world. Ok, maybe she didn’t start the end of the world, but that didn’t stop her from jumping the guy in the middle of the desert as zombies rose all around. And I’m the whore.

Oh, my friend, there are some business opportunities that present themselves gift wrapped and ready to make money. The Woman of The Reach was just such an opportunity.
Before the Sorceress Nestra arrived at the Reach, matchmaking pretty much boiled down to arranging private time between the Barbarian Zorch and Sitka the assassin. Long ago, Sitka hired a wizard to make him like look a woman so he could sneak undetected into the temple of nuns and dispatch the troublesome Mother Ellisa. Unfortunately, Sitka got caught before the wizard could reverse his work. Hence, the Barbarian Zorch’s fascination.
For years, that was my life. A gold coin here, a gold coin there, and a handwritten note saying hey, Sitka, got a minute? It was a simple business to run, but less than lucrative, which surprised me. Considering the barbarian reputation of raping and pillaging and always ready and raring to go, that even with only one customer I should have had a booming business.
Oh, my friend, I should have had a constantly revolving door as Zorch ran in and out wearing his wolf pelt loin cloths and horned helmets, thinking with either his prick or his sword, whichever he happened to have in his hand at the time. Between you and me, I think we know which one that would be. But Zorch was like a bear stocking up for winter hibernation. Months and months of no contact, and then suddenly he’d appear every day for a week straight shouting, “Bring Zorch Sitka, now! Woooomannnn!”
The man was the very picture of eloquence.
And, my friend, this caused problems you wouldn’t believe because Sitka felt that if he was stuck spending the rest of his life as the only remotely female creature in this hellish rock, doling it out to a dimwitted barbarian who’d glued hooves to his helmet instead of horns, then he at least deserved a little romance. He demanded that I provide some sweet nothings whispered in his ear. If you will, imagine the mangled remains of romantic platitudes flowing forth from Zorch’s silken tongue. Eloquence, as I said.
First I tried writing them down, but Zorch can’t read, something I should have realized before I spent all day transcribing one of my more brilliant verses of passion, if I do say so myself. So I tried to help him memorize it. I wasn’t giving him a novel or a five act play. I provided a manageable fifteen lines of glorious ardor and pure yearning put to rhyme, and after a full day’s work, Zorch managed to boil it down to the words, “Fart napkin.” As a result, Sitka felt he was entitled to half the take.
With those two words of spoiled poetry and one demand of payment, I was no longer a matchmaker. I was but a pimp.
And then the Sorceress Nestra arrived.

Buy Off to See the Wizard On Amazon