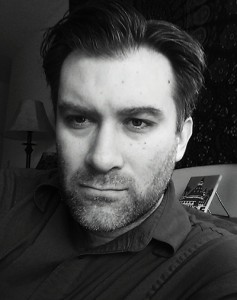 About Clayton Johnson:
I’m a guy who spends most of his day storytelling. I work for a tv station making graphics and animation, visually telling stories. Then I try to sneak in some writing in the evening, telling my own stories, and then I’m making up stories on the fly to get my daughter to sleep (boring is the key).

What inspires you to write?
Those odd thoughts and experiences that happen throughout the day tend to be the biggest inspiration. I used to work the graveyard shift at a hotel, and one night this guest called down and asked me if the water in the toilet was safe to drink. From there it’s a short leap to wondering what happened earlier that day that led him to asking that question, and what likely followed.

The second biggest inspiration is other art. I read or watch something I enjoy and it immediately gets the creative juices flowing, either thinking about an avenue the writer could have explored but didn’t, or wamnting to write my own story in that particular genre or style, or simply the burning desire to get to work brought on by experiencing something powerful.

Tell us about your writing process.
I’m definitely a seat of the pants writer. I’ve found that if I know where a story is going, I get too bored to finish it. I usually start with a semi solid idea. or an extremely detailed vision of one scene and just wing it from there. I usually don’t even know what kind of story I’m working on at first.

My favorite part of that is watching the moments that I thought were just improvisation linking together in the end as if they were heavily outlined.

For Fiction Writers: Do you listen (or talk to) to your characters?
I might say some of the lines out loud if I’m alone, just to make sure they work, but I don’t really interract with the characters much. I do find, though, that if I can’t at least hear the voice of the character in my head before I start writing, then I’m never getting anywhere.

What advice would you give other writers?
Read a lot of bad writing. You learn more from it. Unfortunately, with something awful you toss it aside even if you want to learn what not to do because you just can’t get into it. Try fan fiction. Just for a little while. You’re already invested in the characters and the story, so it’s easy to get swept up in a story that has the kind of terrible writing that would normally take you right out of a story. On the other hand, it’s even easier to get sucked up into a well written piece. It’s like a perfectly disitlled example of what should work but doesn’t. You get to go back and forth between what is successful and what fails miserably. And along the way you absorb a lot of the lessons. You’ll be amazed at how much your writing improves almost subconsciously.

How did you decide how to publish your books?
The stigma that used to hang around self publishing seems to be gone now, and in fact some readers seem to only seek out self published and indie published work. Much the same, I suppose, as the way some viewers seek out only independently produced films. Still, there is so much involved in the process that a person has to learn in order to be successful at it that I wanted to go a more traditional route. I ended up somewhere in between, with a small indie publisher, and she’s great. I would say, submit to agents or publishers, just to see, and while you’re doing that, learn about the self publishing route. Everything you learn will be helpful down the road, especially when it comes to helping to market the book.

What do you think about the future of book publishing?
I used to have to keep a list of books I wanted to read in my wallet so I didn’t forget one when I went to the book store or library. Now, the moment I find out about a book i want to read, I can buy it. I can be waiting at Sonic for my fast food order, find out about a book I’d previously never heard of, and be reading it before my hamburger even arrives. I think that availablity opens up untold avenues. The downside would be that with all the options, it gets a little hard to sift through the white noise. But then, that’s where sites like this one come in.

What genres do you write?: Fantasy and Humor