You are here: Home / Bargains and Freebies / Bargain Books Under $3 / Of Dragon Bones and Ashen Tears by Steffen Larken 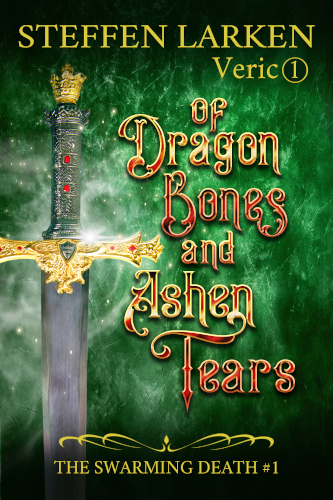 Humans think he’s a freak, he just wants answers about his past… but answers are hard to find in a world that’s slowly drifting into chaos.

As a child, Veric saw his parents burned alive by dragonfire. All they left him is a mysterious box with a broken symbol.

Over twenty years later, he still doesn’t know what’s inside the box.

To understand his heritage, he must retrieve a magic orb that is buried deep under the mountain. There are many obstacles on the way: a storm, hungry orcs, visions, a lunatic centaur… but, most of all, he is forced to face his greatest fear, at the peril of his own life.

“Of Dragon Bones and Ashen Tears” is the first episode in a 12-part high fantasy series that veers progressively into epic. Though it starts gentle, it grows in complexity and becomes darker with each new installment.

What Inspired You to Write Your Book?
I wanted to write a series of epic fantasy novellas that explored discrimination, with lots of mystery and action. The main character is an orange-skinned non-human, but I also wanted readers to be able to identify with him, and so he has many relatable traits and qualities (need to understand where he comes from, flaws, doubts, etc.)

How Did You Come up With Your Characters?
I wanted a relatable character but that also stood out–mainly so I could explore issues of discrimination. He's also a bit of an anti-hero, or at least a reluctant one.

Book Sample
Amid a raging sea, with roaring winds pushing our ship further toward the whirlpool, I considered jumping overboard.

Only one thing held me back.

Sailing was quicker than swimming, in much the same way that riding a horse was quicker than walking. I could swim, but it would take way too long. Not to mention, I would be exhausted by the time I reached the coast.

The captain was barking orders and the crew scurried around the deck. An inexperienced eye may have read this as panic, but I did not. These people knew what they were doing. This was not their first storm. Focus and determination were in their every gesture. Urgency, as well, but that was to be expected.

I decided to wait. I could always jump later, if things turned sour.