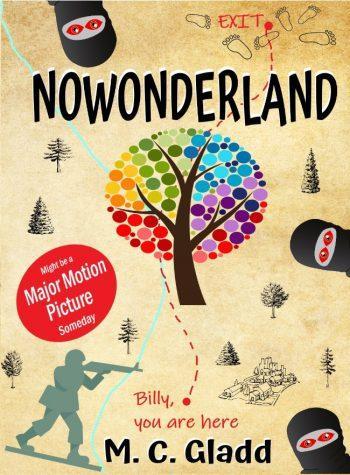 Billy, the only child of a working mother, moves into his father’s childhood home and soon finds himself trapped in a hidden fantasy world that’s as dangerous as it is weird. Will he make it home? He finds help from the most unlikely cast of characters imaginable, and finds a link to his past he never knew existed. You’ll laugh. You’ll cry. You’ll lose yourself in a world of pure imagination.

Targeted Age Group:: 10 and up

What Inspired You to Write Your Book?
I wondered one day what my version of a fantasy world like Oz, Narnia, or Wonderland would be like and I was suddenly filled with ideas. This is the result. The story will continue in a series. I hope you enjoy reading it as much as I enjoyed writing it.

How Did You Come up With Your Characters?
Some of my characters are drawn from life, either friends I've known or public figures. Others just sprang to life in my head. I've enjoyed giving them all their own voice.

Book Sample
Billy soon ran out of tunnel, er rather hallway, and entered a room about twice the size of the living room in his and his mom’s small house. Purple tiles still lined the floor and wood paneling the walls. There was a lopsided vaguely trapezoidal shaped door on the far side of the room. Two crooked looking sofas and two armchairs of grey leather or horribly patterned fabric lining the walls, all scaled down for people of a rather small stature. He walked nearer to a sofa that had a dotted fabric on it only to realize that the small dots were in fact insects. The bugs on one of the cushions scrambled out of the way, giving him room to sit down, but not before spelling out ‘sit here please’ in all caps and then crawling off to the side, still in formation, like a marching band halftime show. He didn’t sit down. As he backed away from the sofa, he could have sworn he heard a thousand tiny sighs of disappointment coming from it.

Between each of the chairs and sofas was an end table of some sort, each supporting some of the ugliest lamps Billy had ever seen. The tables themselves had been crafted with all the loving care of a nearsighted carpenter who didn’t own a tape measure, a square, or a level, and had never held a hammer in his life, and who was working with his feet instead of his hands. In the center of the room was a dining table with four mismatched chairs. On the table was a pitcher full of water and four cups, none of which was perfectly round. There wasn’t a single right angle, level surface, or straight line in the whole room.

The water reminded Billy he was thirsty. As he looked closer to the pitcher, he noticed little fish swimming around inside. Weird looking fish that were subject to the same laws of dimension and proportion that affected the rest of the room. As he looked closely at the fish, one of them took notice of him, swam up to the glass and said, “what?” in a voice both too deep for such a tiny fish and muted like you would imagine someone speaking underwater would sound like. He also sounded a bit irritated.

“Nothing,” he replied, backing away. He pulled his backpack off his shoulders and grabbed his own water bottle. He froze before opening it when the door opened and in walked the strangest creature Billy had ever seen. It didn’t see him though, it was staring at the floor as it walked in, mumbling to itself. Its mumbles were interspersed with strange whistling and popping sounds.

“Oh my! Oh my,” it said, waving its arms around and jumping back. “You scared me half to death.”

Billy studied the creature while he, (it sounded male Billy decided), calmed himself down. He was about three and a half feet tall and was just as unsymmetrical as everything else in this strange place. He had ten fingers at least, six on one hand, four on the other. One of his lower teeth was a fang that stuck out over his top lip and was so long that when his mouth was closed the tooth in question rested perfectly, deep within his left nostril. This is what caused the whistling sound every time he exhaled with his mouth closed. The popping sound was that same fang overcoming suction every time it left his nostril when he opened his mouth. He had dark curly hair on the right side of his head and straight red hair on the left. His eyes were different in size and color. Every time they fell on Billy, the creature winced and turned away. The clothes he wore were almost normal all things considered, a bright red, button down short sleeve shirt with what looked like yellow two-headed lizards on it and brown slacks with rough looking, different sized, boots on his feet. Billy was pretty sure the lizards were moving around a little.

Presently it said, “(Pop) I assume you came from the…uh…Outside? (whistle)” It met his eyes again and quickly looked away and grimaced, although that may have just been his normal expression.

“What do you mean by Outside?” Billy said, confused. “I came down the tunnel at the end of that hallway he said turning toward the end of the room he had come from. The arch over the hallway opening had a sign above that read “The Gallery” in crooked uneven lettering.

“(Pop) I know that. I live here. You came through the entrance from the Outside,” the creature said, a tad impatient. Like this should be obvious, which Billy supposed it might be in a place like this. “(Pop) They told me when I bought this house that this might happen, (whistle pop) but that it was very unlikely,” he added, more to himself.

“Well, I’m here,” Billy said. “If you could just tell me where here is, I’ll be happy to return to the…uh Outside and get out your house.”

“(Pop) That would be great actually,” the creature answered. (Whistle pop) “You’re quite ugly and hard to look at to be honest. But you can’t go back that way. As I said, it’s an entrance. To go back you need an exit.” Again, his tone was that of a parent explaining something obvious to a particularly dense child.

“(Pop) Sorry. I didn’t mean to be rude, but your face is rather…. symmetrical.” At this, he shuddered as though the thought repulsed him immensely. “And as I said, it’s an entrance, not a tunnel. One is one-way and the other is not. Is that not how things work in the Outside? Go look for yourself if you don’t believe me. (whistle)”