You are here: Home / Bargains and Freebies / Bargain Books Under $3 / Nothing but Darkness by Maria Ann Green 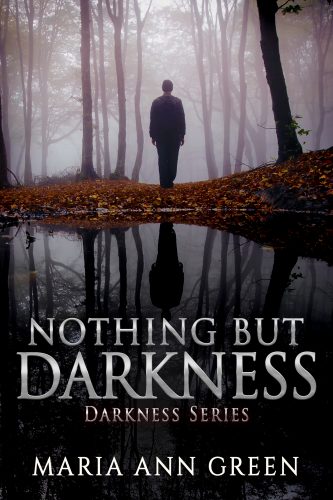 Aidan Sheppard has always resisted his darker urges—only the violent ones, he’d never deny himself anything sexual—until one night when he goes too far. Way too far. It doesn’t matter that it was an accident; it still happened, and he can’t escape it. Now he must choose between what’s expected of him, morality, and what he truly wants, depraved release.

But as bloody fantasies flood his mind, Aidan struggles to find control. Desire taking over, he dives deeper into his darker side. His best friend and coworkers remain unaware of the calculating criminal he’s become in the hours between work and drunken escapades.

Aidan analyzes each step necessary to fuel the cruel fire inside him, logic and preparation only two of the many weapons at his disposal. His creativity grows as well, until he hits a dangerous snag that threatens to expose him and obliterate everything he’s built. Paranoia and stress chip away at his confidence, but he must stay in control long enough to cover his tracks, or he risks his freedom, as well as his life.

He’s becoming more comfortable in the dark than you are in the light.

If you like thrillers with deliciously dark twists and a main character you love to hate (but still want to see make it to the end), Nothing but Darkness might be your next favorite book. It’ll keep you reading just one more page until you reach the end.

What Inspired You to Write Your Book?
When I came up with the idea for Nothing but Darkness it all started with the desire to write a book from the point of view of a typically bad guy. I wanted to dig into the dark side of a psyche, and really play with the character of that. It was incredibly fun to write, and it's inspired two sequels. I think my favorite books always have a really unlikable character, so I wanted to utilize that, and really have fun with it. I took it to the extreme sometimes, and I think that's why I like this book so much!

How Did You Come up With Your Characters?
The characters in this book are mostly insidious, and I wanted to show the dark side of people. I wanted to take, even secondary characters, and show how you can never underestimate anyone. I also hoped to show that you can never truly know someone, unless they want you to. So I had those initial hopes, and I molded characters from there. It was really fun, and it helped play into the plot a lot.

Book Sample
My eyes widen, watching the arrow fly toward its target. Leaves flutter, pushed aside. As it lands, into the sinew of her neck, my lungs fill with triumph.

Pride radiates through my chest. I’ve accomplished what I came here to do.

The doe freezes, pain not registering yet. When it does she starts to dance, shaking her head and stomping her feet. A sad sound fills the air, ringing out my victory, as she stumbles through the trees. I’d have thought she’d die faster. The arrow must have missed her artery.

Rising from my hunting blind, I move toward the wounded animal. She tries to run, but her strength goes with her coordination. Falling head first into tangled roots, it’s evident she won’t last much longer.

I should put her out of her misery. Though, as the thought filters through me, I hesitate. My knife is ready, yet it remains still.

I don’t. I keep watching as she flails, screeching in agony. Red stains her otherwise pristine coat, standing out against the white. I don’t think I’ve seen a more vibrant shade.

Snapping myself out of it, I raise my blade then stop as I watch the last moment of life fade from the doe’s eyes. She dies while I kneel close enough to feel her last breath against my knees. The pink tongue lolls from her mouth. This hunting trip is a technical success, yet the experience feels inadequate now. I was supposed to be a man. I was supposed to end her before the arrow did.

How could I fail?

Anger bubbles like acid from my stomach, coating the inside of my throat. I will not be a fuck-up. This weekend is for me. This is my time. I will not be weak. Without thinking any longer, as instincts take over, I act.

I plunge the metal into a soft spot under her chin. Only her head moves with my thrust. The second spout I’ve opened drains over my arm onto the cold ground. It flows warm at first, but chills quickly. The scent is overpowering. I’ve never been this close to such a significant amount of blood.

It’s over too fast.

As the wound stops spilling, I stand, trying to clean myself off. She’s going to be heavy on the way back to the cabin.