You are here: Home / Bargains and Freebies / Kindle Unlimited eBooks / Nothing but bones 1: The Wasteland by John Carrarn 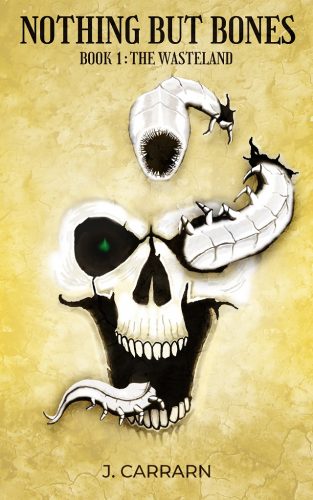 After the exodus of all life, our galaxy is left empty and desolate. But in the absence of life, undead energy surges. Millennia after the last humans fled the galaxy only the dead are left to roam the earth. On this barren wasteland, Solus awakens. With no memories or even a personality, he is cast into a dangerous world. He will need to learn fast if he is to keep his new existence, for he is not alone.

What Inspired You to Write Your Book?
I've always been curious about what makes up a person. Is it their upbringing and where this was, or their genetics? While reading the massive amount of fantasy, I found only a few books with the POV from a creature that didn't grow up as we do, but I've always found them fascinating. Beyond this, I've always enjoyed stories about the undead and wondered what would happen if those were placed in a world with little to no external help. How would they grow? What would they do? This is my take on this.

How Did You Come up With Your Characters?
After deciding what to write, I had no idea yet what type of character I needed. I just knew it had to start as a blank slate, an empty book. As I began with my blank slate and wrote how it acted, it showed signs of character! Small at first, they began shaping an image in my head, and at some point, Solus was born. As soon as he did, I knew he couldn't be alone and began imaging situations that would shape undead in other ways. For weeks I wrote simple starting points and looked at how characters might work through them: scared characters, strong characters, curious ones. Almost all of the characters in the book originated like this, as did many of their written or not backstories.

Book Sample
It took over three weeks, but then, when the sky started to turn dark again, Solus heard the sound he had been waiting for.
Ping!
FINALLY! Solus shouted in his mind, and a sharp wave of emotions rushed through him only to quickly diminish and fade away, leaving him feeling empty.
Over the last few weeks, he had noticed he was experiencing increasing surges of emotion. Although they only lasted a few seconds or less, they now came as often as a dozen times every day.
Taking a quick look at his status, he saw his dexterity had increased to six. And only just in time. His mana-field was now at ninety-eight, and with the current generation, it would grow to ninety-nine today. As far as he could estimate, that left him with less than two days before he would gain the last point he needed in order to evolve.
It had been a rewarding few weeks, though. Studying his wisdom, Solus felt a small amount of triumph from its increased value, even if it was only by one point. He had needed to find the right way to increase his dexterity, and that had taken him a long time and different attempts, never knowing for sure if what he was doing worked. In the end, his dexterity had increased, together with a single point of wisdom.
At night he would throw stones utilizing the illumination of his mana-field to see. With one hand, he would throw a stone high with a slow curve and then try to hit it with another one. Then during the day, he ran across town, jumping obstacles, climbing buildings, anything he could think of that might challenge him.
Then, two days into this set of exercises, his dexterity had increased. He hadn't known which activity had actually increased it, but with an unlimited amount of endurance, he could do both and not care too much as long as it worked. Right when he had decided this, his wisdom had increased by one, causing one of the longest moments of emotion so far: satisfaction.
Sitting back down on his slab, Solus looked at the pile of stones lying next to him. He wouldn't need them anymore. A moment of happiness flowed through him, and Solus enjoyed it for as long as he could. After the feeling had come and gone, he glanced at his other side where he had put the sphere. He had retrieved it from the center building during one of his dexterity training sessions and had placed it on top of the remaining worm plates that he had not used on himself. Currently, he had two on each leg, one on his chest, and two on each arm. He had tried many different positions, but after realizing it didn't hamper his movement, no matter which setup he chose, he had gone with the initial one.
—
While Solus was pondering his actions, outside of town, a few miles into the desolate wasteland, two shadows were moving side by side in the almost pitch-black night.
"You are sure… a hundred percent sure that there should be another town this way?" snarled the tallest with an irritated voice.
"Always you ask this question… Every hour, dozens of times. Why? Did the evolution that gave you that brain break your mind? Are you incapable of remembering what I tell you?" the second one replied with a deadpan voice. Their conversation seemed to echo from all around the pair, impossible to tell the exact origin.
"There is nothing wrong with me, but you know it's hard to handle the emotions! I get so bored and insecure all the time!" the voice rumbled, sounding aggravated and hurt.
"No. I don't know… nor do I care or want to talk about it… again," the other voice replied without any emotion. "But to humor you, we should arrive there within a few hours. The trail the Wyrm left was spotted here before it got blown away by one of those airflows."
A white hand slapped the taller figure. "But no more talking!"
The taller figure, more massive by far, snorted. "Fine, but keep your sticks to yourself, or I'll rip them off and use them to scratch my back."

Links to Purchase Print Books
Buy Nothing but bones 1: The Wasteland Print Edition at Amazon

Links to Purchase eBooks – Click links for book samples and reviews
Buy Nothing but bones 1: The Wasteland On Amazon