You are here: Home / Fiction / Action & Adventure / Night of the Assassin by Russell Blake 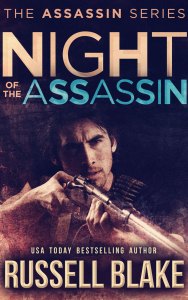 Night of the Assassin is the gritty, edge-of-your seat prequel to King of Swords – the first book in the bestselling Assassin series. A no-holds-barred, breakneck-paced thriller, Night charts the early years of El Rey – known as the King of Swords – a super-assassin responsible for some of the world’s most spectacular and daring executions.

Framed against the backdrop of present-day Mexico’s brutal narco-trafficking violence, Night of the Assassin chronicles the making of a monster – a cold-blooded, ruthless killing machine. Raw, disturbing, edgy and unflinching, this epic saga defies convention to create a roller-coaster of intrigue, suspense and thrills that will leave even the most jaded thriller aficionados gasping for breath.

What Inspired You to Write Your Book?
After writing several books in my best-selling Assassin series I wanted to let my readers know how the super-assassin El Rey got his start. Also many of my readers had been asking the same question, so I decided to answer them.

How Did You Come up With Your Characters?
I was intrigued by somebody who is like a super spy. He’s morally ambiguous. He works for evil people sometimes but he wants to have an integrity in his work. He’s a perfectionist.

Book Sample
“The three hundred I want now, and before the day’s end I will bring you a photo of your enemy dead. The others, half up front, half upon successful completion. It’s actually a bargain, but I’m anxious to make a name for myself and earn your support,” the young man said.
Valiente nodded. It was indeed a bargain. They both knew it. He was being handed the keys to the kingdom for a song.
“I have to say, this comes as a complete surprise. If you can pull this off, you’ll be very, very busy carrying out jobs for me.” Valiente stared into his empty cup. “And what is your name? What shall I call you, my young mystery killer who comes bearing gifts?”
The young man didn’t hesitate. He’d already decided on his professional moniker. He would be named after the cursed card that had ruined his life, and had freed him at the same time.
“El Rey. After the tarot card, the King of Swords. You can call me El Rey.”

About the Author:
A Wall Street Journal and The Times (UK) featured author, Russell Blake is the bestselling author of twenty-five books, including the thriller novels Fatal Exchange, The Geronimo Breach, Zero Sum, King of Swords, Night of the Assassin, Revenge of the Assassin, Return of the Assassin, Blood of the Assassin, The Delphi Chronicle trilogy, The Voynich Cypher, Silver Justice, JET, JET II – Betrayal, JET III – Vengeance, JET IV – Reckoning, JET V – Legacy, JET VI – Justice, Upon A Pale Horse, BLACK, BLACK Is Back, and BLACK Is The New Black.
Non-fiction includes the international bestseller An Angel With Fur (animal biography) and How To Sell A Gazillion eBooks In No Time (even if drunk, high or incarcerated), a parody of all things writing-related.
Blake lives in Mexico and enjoys his dogs, fishing, boating, tequila and writing, while battling world domination by clowns.
His blog can be found at RussellBlake.com where he publishes his periodic thoughts, such as they are.