You are here: Home / Fiction / Night Bells by L.M. Sherwin 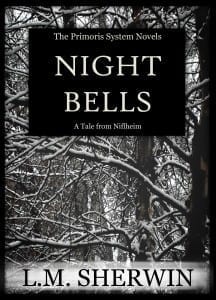 Lord Maslyn has been a prisoner in his own home for the last six years. When the twelve year old noble of New Kristiansand discovers a secret passageway in his tower, he delves into a world of adventure, intrigue, and secrecy. With the help of a mysterious stranger and his friend Arna, Lord Maslyn seeks to unravel the secrets of his past and to plot his escape from his castle prison. As his life changes drastically, he is drawn into the larger tale of his elder twin brothers. Can he unearth the secrets of his family’s past without endangering those he has come to hold dear?

Author Bio:
Sherwin has been writing since she was too young to hold a pen! Her first stories were dictated to her mother who wrote them down to preserve for posterity. As time went by, Sherwin moved on to write amusing short stories. In middle school, she wanted to tackle her first epic novel. Things kept getting more involved and, though she still has all the notes from this novel, Sherwin put it aside to pursue other story ideas. In college, she started work on a manuscript she intended to finish. After she married her high school and college sweetheart, her husband encouraged her to pursue her life-long dreams of becoming an author. He challenged her to write an hour a day. So, she did. After a year, she had written four manuscripts–three novels and one novella. This year, she published two novels. She has plans to publish another in early 2013.

What Inspired You to Write Your Book?
Honestly, I was inspired to write about a boy noble after watching a certain T.V. show. After I started writing his story, I started weaving ancient Norse culture and legend throughout the plot. I suppose it was a variety of things that all came together and inspired me to write Lord Maslyn’s tale.