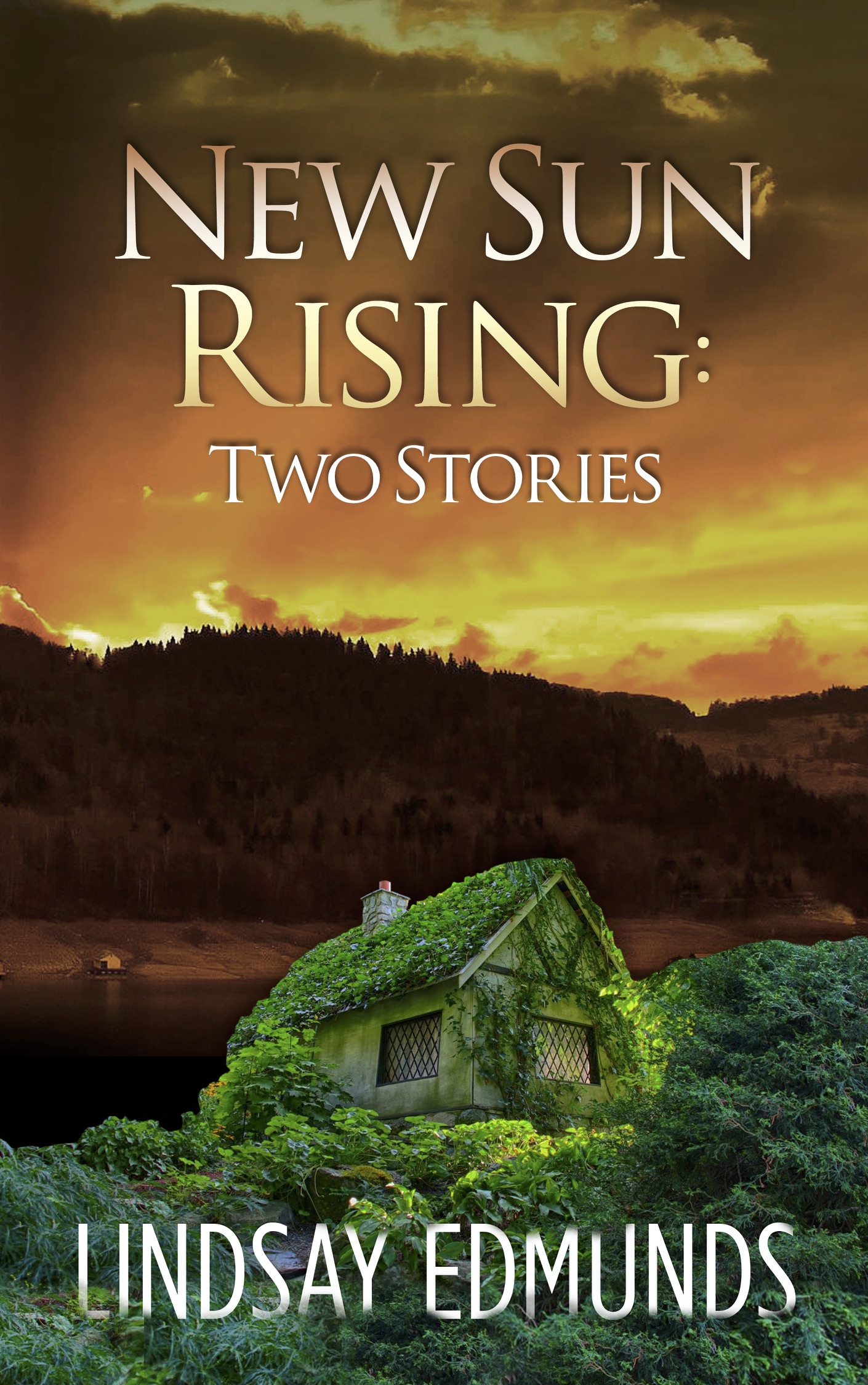 This “appetizer” book is inexpensive in terms of both money (99 cents) and time (43 pages on the Kindle).

The year is 2199; the place, the Reunited States. Kedzie Greer grew up in paradise: a small lakeside community with utopian ideals. But on turning sixteen — the age of legal adulthood in 2199 — Kedzie decides she has had enough of paradise.

Story 1, “The Town With Four Names,” is about Kedzie’s idyllic hometown, which has survived against all odds for more than three hundred years. Cassie Stillwater, a 90-year-old descendent of the original founder, writes down the town’s history, a history that turns personal.

Story 2, “Leaving Home,” is about Kedzie’s decision to seek a life outside the town gates. Although legally an adult, she still is a kid—idealistic and naïve.

What Inspired You to Write Your Book?
It began with an image of an angel leaning over a hospitalized young girl, telling her that she will live. This image did not end up in the final draft, though.
I wanted to write about a teenage girl with special and even heroic gifts, but mostly from the points of view of the adults in her life. So many stories are about “teenager with special gifts saves the world.”

How Did You Come up With Your Characters?
The name of my teenage heroine came from a stop on the Chicago CTA. I was riding the train into the city from Midway airport and it stopped at a place called Kedzie. I knew instantly that I had the name of the main character in NEW SUN RISING.

Book Sample
From “The Town With Four Names” (489 words)
Some new residents moved here to hide from the Middle Machine Age with its domination by e-beasts who hate the human race. No one really hides anywhere, of course. However, we are law-abiding and our town is considered inconsequential in the grand scheme of things, so we are mostly left alone. In 2199 in the Reunited States there are supposed to be two classes of citizens: wealthy and poor in their separate silos. We walk a third path.
Some people fell in love with Star Lake. People whose churches had fallen found a safe haven to pray and meet in small groups in the physical world. People who make things—such as carpenters, artisans, musicians, and painters—found community. The town grew busy again. Musicians take the stage at our little concert hall. We repaired the roads, we rehabilitated the buildings. The fountain began to run again, although there is no sculpture in the center anymore.
Our town has facets. From some angles, it looks wealthy. From others, it does not. There are fewer single-family homes than there appear to be. Most houses are cut up into apartments, where people live comfortably but without luxuries. There are twelve apartment buildings, both condo and rental. All are former bed-and-breakfasts, hotels, and rooming houses.
However, living here has its price. People who move into Stillwater have to understand that. We do not live in silos, isolated from each other. We also are a true democracy, which requires charity, compromise, and superhuman tolerance for discussion. During our community meetings, democracy can seem like the most tiresome thing man ever invented. Everyone’s opinion is weighed, and everyone has an opinion. Let that reality sink in.
In the Reunited States as a whole, Democracy exists in name only. People vote, or I should say “vote.”
At birth, everyone begins to accumulate a Net profile called a ubot. A ubot is you in Networld. After sixteen years, ubots get voting rights, which means they are polled by govbots twice a year. The results of these polls are valuable to businesses. They are bought and sold openly around the world.
The results of ubot elections always indicate that everything is fine. “All right by me,” say our ubots year after year. Here is the creed every Middle Machine Age child is taught:
Your ubot is a chain forged link by link by your own actions.
You can no more alter the ubot than alter the past.
Our children also have to be taught the fiction that ubots cannot contain any errors. We teach them this because like you, we want to survive. The e-beasts destroyed an entire country, peaceful little Kartan, to make a point about power. That could have been us. That could have been anyone. We do as we are told, but not just what we are told. Outside the gates, our ubots say everything is fine. Inside the gates, people vote for themselves.