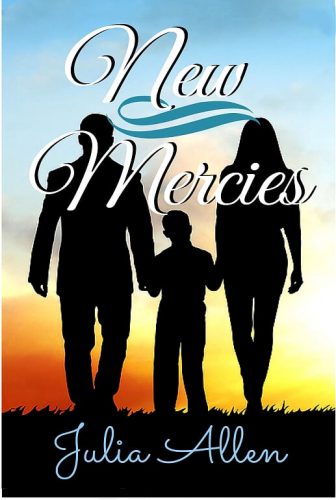 A troubled single mom and a shy young pastor strike up an unlikely friendship. Will gossip destroy them both?

What Inspired You to Write Your Book?
A fictionalization of my real experiences as a divorced single mother facing church gossip and dealing with struggles of faith surrounding divorce and remarriage after finding a second chance at love. I wanted to strengthen the faith of others in this situation.

How Did You Come up With Your Characters?
The two main characters are very loosely based on myself and my husband – mainly in appearance and general mannerisms. Protagonist's mother was also loosely based on my mom and the relationship we struggled to maintain all her life. Other supporting characters exhibit combinations of traits and personalities from various people I have met, or were dreamed up from imagination.

Book Sample
Dodie searched the shoulder anxiously for a safe place to pull over. Danny’s coughing from the back seat tore at her. I need to stop now. Doesn’t matter if I get stuck.
Dodie tore off her seatbelt before the car settled into park and jumped out, swinging the back door open. Her fingers fumbled with the car seat buckle, but she extricated her son and began expelling the phlegm from his lungs before she’d even seated herself on the running board.
“Breathe, Danny!” Don’t die on me, Baby! You’re all I have left.
Though it wasn’t quite dawn, Dodie noticed a jogger rambling down the country roads, picking his way carefully to avoid the muddy patches of Carolina red clay. She didn’t recognize the face, but it had been three years since she’d been in Meadowbrook. Surely there were new faces.
The jogger changed course toward her. “Mornin’. Havin’ some trouble wit’ yer car?” His eyes moved to her hands, rhythmically pounding Danny’s back to clear his lungs. He won’t understand even if you explain. Just send him on his way.
She faked a smile before answering. “I’m fine, thanks anyway.” Not true, and you know it. He could have called home and told Ma and Pa why you’re running late.
The jogger shook his head and went on, but Dodie continued arguing with herself. I don’t need help. I’m fine. We both are. Danny’s cough had subsided, but the spell had left him pale and weak. He needs his nebulizer. Where can I find an outlet to plug it in?
She looked around, trying to get her bearings. Behind her she spotted a familiar steeple. The church. Perfect. The doors are always open.
Dodie balanced Danny on one hip and flung her purse and the diaper bag over the other shoulder. It was awkward plodding across a muddy field in high heels. Guess these shoes are toast. Probably my stockings too, but it can’t be helped.
When she reached the church door she stomped the mud off best she could, then tried the door. It swung open easily. Good. There used to be a rocking chair in the nursery. Wonder if it’s still there?
She found her way easily in the dark. This building was as familiar as her own home.
Settling into a rocker near an outlet, she pulled the nebulizer from the bag and administered Danny’s treatment.
∞ ∞ ∞
Chris slowed as he approached the car on the shoulder on his way to the church to pray. A breakdown? Concern mingled with trepidation as he peered into the dark windows. Empty. Relief flooded him. The thought of having to speak with a stranded motorist actually terrified him, though he genuinely desired to help people. Lord, how can I be the person you called me to be when I’m this shy?
Pulling into the church parking lot, he popped his Camaro out of gear, set the brake, and headed for the door. He hummed the worship tune that had been playing when he killed the engine. Why is a light on in the nursery? Curious, he headed inside.
∞ ∞ ∞
Dodie heard the creak of the church door opening. Who’d be at the church at this hour? Fear rose in her, but she quieted it. This is Meadowbrook, not New York. Whoever this is belongs here.
The stranger in the doorway wore a worried expression on his handsome face. He cleared his throat nervously at the sight of her.
“Um – Good morning! Don’t think I know you. Christopher Tanner, pastor of this church.” He extended a hand shyly, but drew it back as his gaze settled on the bundle in her arms.
So this is the new pastor. I bet he breaks some hearts! “Dolores Hansen. Sorry to barge in like this, Pastor Tanner. I needed to borrow your outlet. This is my son, Danny.” She smiled up at him. His face colored, and Dodie noticed him chewing his lower lip nervously. He’s got wonderful eyes. Hazel, I think.
“No problem, Mrs. Hansen. Are you new to the area?”
Hardly. “Actually, I’m moving back here after an extended absence. Perhaps you know my parents, Samuel and Rachel Bay?” Danny’s color looked better, so Dodie removed the oxygen mask from his face, pushing the machine aside.
Recognition lit the minister’s features. “Bay? You’re Mark’s sister, aren’t you?”
∞ ∞ ∞
As Chris realized who she was, a dozen mysteries unraveled. Mark was his best friend in this town. His only friend, really. Mark spoke often of his sister in New York with the sick child, and had mentioned her recent divorce and plans to move back home. That’s why she looks so lost. “Mark mentioned you were coming, but didn’t say when. So nice to finally meet you!” He worked at making his tone warm, but even he heard the hesitation in his voice. She’s going to think you don’t like her. She’s Mark’s sister. There’s no reason to feel shy. The child spied some toys in a corner and scrambled from her lap.
“And you. Mark and my parents speak well of you.” She stood, taking a step toward the door, eyes following the little boy. “We’d better get going. My parents are expecting us.”
“Of course. Don’t let me keep you. Sorry if I startled you.” Chris saw the bag at her feet and bent down to help her collect her belongings. “Here, let me get that for you.”
Chris scooped up the bag just as the young woman bent for it. The collision echoed across the empty room. “Ow! My nose!”