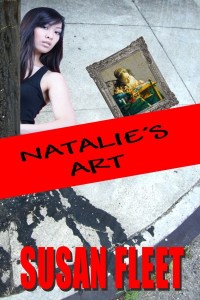 ART HEISTS, MURDER and REVENGE! In 1990 two robbers stole paintings worth $500 million from the Isabella Stewart Gardner Museum in Boston. Twenty years later, a ruthless man plans to steal several more. He forces Natalie to help him, but after the heist he intends to kill her. Not only that, NOPD Detective Frank Renzi is hot on her trail. Will Natalie escape? Don’t miss the explosive showdown between Frank and Natalie.
Feathered Quill Book Awards named Natalie’s Revenge Best Mystery of 2014. Natalie’s Art is the thrilling sequel.

What Inspired You to Write Your Book?
I can still remember my distress in 1990 upon learning that several paintings had been stolen from the Isabella Stewart Gardner Museum in Boston. I had visited this museum many times. One of my favorite paintings, The Concert by Johannes Vermeer, was one of the stolen paintings. At this writing, none of the stolen art works have been recovered. I knew that some day I would write a book about the Gardner art heist. Natalie’s Art is the reseult.

How Did You Come up With Your Characters?
Detective Frank Renzi is a continuing character in my series. Natalie is the main character in a previous book, Natalie’s Revenge. My three villains were a challenge. Pym is a British philanthropist, who rose from poverty to acquire great wealth. He has a hankering for fine art. Gregor, the ruthless man who executes the art heists, is a complex character with a sordid background. Nicholas helps Gregor with the Gardner heist. But there is no honor among thieves, only treachery and double-dealing.