You are here: Home / Fiction / Romance / Mute by ML Nystrom 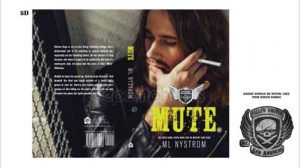 “HE LOVES LONG, LOVES HARD, BUT HE DON’T LOVE EASY.”

Katrina Vega is set on one thing: finishing college. She’s determined not to let anything or anyone distract her, especially not hot brooding bikers. On her mission to stay focused, she doesn’t expect to be pulled into the fold of a motorcycle club, let alone into the arms of Alec “Mute” Stillwater.

Unable to keep her guard up, Katrina soon discovers that beneath the hard and rough exterior of a family she’s grown to care for, there’s also loyalty and passion she’s envious of. But falling for the club’s enforcer will not only threaten her plans but quite possibly her life.

What Inspired You to Write Your Book?
I was approaching the half century mark, when it hit me. I was turning 50. Wow, 50 years old! Maybe I was coming to a midlife crisis but I stopped to think about it a bit. I've worked hard all my life, both in my career and other interests but I've also had a lot of what I call "someday" projects. Someday, I'll take that cruise. Someday, I'll take that course in silversmithing. Someday, I'll write and publish a romance book. When 50 starting looming, I decided it was time to turn those "somedays" into "todays". Mute came to me then complete from beginning to end, as if he was ready to be the "today" for me to get started.

How Did You Come up With Your Characters?
I like to think my characters each have a little piece of me inside them but are different. Mute is the silent badass. Kat is quiet and unassuming but strong in her own way. I've been a bit of both. The biggest challenge was how to get two people to communicate when one of them cannot speak. I've not seen this type character an any book I've read and thought it was a neat concept.

Book Sample
I was behind the bar, pulling another beer from the tap for Stud, when the room seemed to go still. I looked up and saw another club member in the doorway, one I’d not met yet. He wasn’t just big, he was BIG. He wore a tight black tank under his cut that showed off thick, hard arms covered in tribal tattoos, black jeans that molded to his strong, muscular thighs, and heavy black biker boots. He had a striking and strong presence, and I felt my gut tighten in startled reaction. He wore his black hair long and loose, waving back from his face, and looked like he might have some Native American blood, probably Cherokee as there was a reservation nearby. When he walked in the bar, I swear the air temperature dropped. This guy’s aura said he would fuck you up if you dared get out of line. His eyes were piercing, could freeze you to the spot in an instant. He was a wall, unsmiling, expressionless.