A string of brutal murders has bodies piling up in Brooklyn, and Detective Frankie Donovan knows what is going on. Clues left at the crime scenes point to someone from the old neighborhood, and that isn’t good.

Frankie has taken two oaths in his life—the one he took to uphold the law when he became a cop, and the one he took with his two best friends when they were eight years old and inseparable.

Those relationships have forced Frankie to make many tough decisions, but now he faces the toughest one of his life; he has five murders to solve and one of those two friends is responsible. If Frankie lets him go, he breaks the oath he took as a cop and risks losing his job. But if he tries to bring him in, he breaks the oath he kept for twenty-five years—and risks losing his life.

In the neighborhood where Frankie Donovan grew up, you never broke an oath. 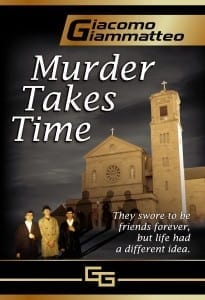 How is Writing In Your Genre Different from Others?
I don’t think it is. I think writing in any genre is about characters and storytelling.

What Advice Would You Give Aspiring Writers?
Listen to your heart.

Author Bio:
Giacomo Giammatteo is the bestselling author of Murder Takes Time, A Bullet For Carlos, and Murder Has Consequences. He writes gritty crime dramas about murder, mystery, and family. And he also writes non-fiction books including the No Mistakes Careers series.

When Giacomo isn’t writing, he’s helping his wife take care of the animals on their sanctuary. At last count they had 45 animals—11 dogs, a horse, 6 cats, and 26 pigs.

Oh, and one crazy—and very large—wild boar, who takes walks with Giacomo every day and happens to also be his best buddy.

What Inspired You to Write Your Book?
I wanted to write a mystery with a different theme. This is a story about three kids who grew up as best friends, and it’s about what happens when they grow older, how life interferes.