You are here: Home / Fiction / Mystery/Suspense / Murder by Modem by Chris F. Fotheringham 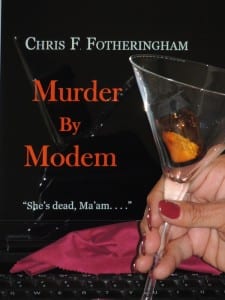 “Murder by Modem” is a literary first — an e-book of the Internet, by the Internet and for the Internet. The plotline quickly evolves into a meta-fictional mindbender when a dozen chat room writers become the prime suspects after the mystery they concoct mirrors their own agent’s real-life murder.
On the eve of the book’s online launch, renowned New York book agent Dana Jester is dead, a nationwide manhunt ensues, and the clock is ticking.
The stakes couldn’t be higher for Moria and Blake Genaro, founders of the upstart Chrysolinn Press. Their roll-of-the-dice: Whether to publish the company’s maiden book – an innocent fiction or a murderous weapon?
Moria and Blake are no strangers to publishing. Twin children of the late Henry Genaro, a New York literary icon, they grew up in the sometimes scurrilous business. Now, as accomplished editors themselves, and disheartened by the culture of books crossing their desks, they want out – but not all the way out.
In fact, they decide to go all-in, Nevada style.
Proven best-selling author Peter Hampson enthusiastically promises to put Chrysolinn Press on the map with his latest book. The Genaros confidently gear up to challenge the scions of the East, launching a new publishing house at their longtime family retreat in Crystal Bay on the shores of Lake Tahoe.
But Hampson stiffs them: He drops out of sight with a hefty cash advance. The Genaros, with the soulful presence of newly hired assistant, White Eagle, reluctantly pursue a “gimmick.”
They recruit a dozen writers from around the country to engage in a 24-hour marathon in a controlled Internet chat room setting. Conjuring a group-written “perfect murder” scenario is an exciting and unique literary venture – until they learn their very own agent dies just as the fiction they created lays out. Only the “wordy dozen” – and hands-on editor White Eagle – are privy to the details, rendering them all suspects.
“Murder by Modem” is a provocative whodunit that unfolds against a looming deadline and worldwide news headlines. Knowing that publishing the book could make or break Chrysolinn Press, White Eagle’s eleventh-hour tactics unravel how revolutionary fiction foreshadows a true-to-life tragedy.

Chris F. Fotheringham is an independent journalist who has reported and edited for newspapers in Missouri, California, Idaho and Nevada. A 1976 graduate of the University of Missouri-Columbia’s School of Journalism, the former high school English teacher lives in Mesquite, Nevada, where he established a manuscript editing Web site, www.chrysolinnpress.com, and wrote the mystery, “Murder by Modem.” His novel, “Let Us Be! A mining Saga: Is the Gold Worth the Water?” was published in 2013. He can be contacted at cfnewswire@aol.com.