You are here: Home / Children and Young Adult Books / Mo: The Talking Dog by Michelle Campbell-Scott

Fun animal adventure story for children aged around 8-12 years of age featuring Mo the talking dog, Mimic the parrot, and Martin, a 12-year-old boy who is struggling to deal with the school bullies.

Have you ever wondered what your dog would say if he/she could talk? You don’t have to wonder anymore! This is the story of a puppy called Mo who is rescued from drowning by a boy. The boy’s Dad Henry is a veterinarian. Mo is unable to bark and Henry decides to help him by getting a scientist friend to grow him a new voicebox.

After the surgery, Mo starts making human-like sounds and the family realize that life is about to get a lot more interesting! The family parrot, Mimic, helps teach Mo how to talk – they both learn a lot from children’s television. 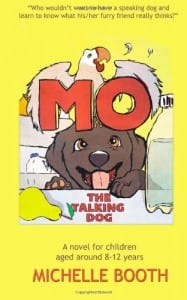 How is Writing In Your Genre Different from Others?
I find children’s books quite hard to write actually. I’m a former teacher so you would think I should know what children want but I really believe you can’t stereotype or generalize where children are concerned. They either like things or they don’t. One child will read a particular book at 5 and love it, whereas another 5-year-old will find it too old for him. They’re so different!
So I wrote this book as if I was writing it for my daughter, when she was about 8 and my son when he was about 10. My daughter was a little ahead in her reading, as lots of girls are, and my son didn’t (and still doesn’t) really like to read but a good story will keep him entertained for a while… until something else catches his eye!
So I would say that it is quite different writing in this genre, quite hard to get the tone right for the intended age group.

What Advice Would You Give Aspiring Writers?
The same as Stephen King gives – read a lot and write a lot.
I would add my own advice too – don’t self-edit. Wait until you’re done, then go back and check, re-write, re-arrange. While you’re writing, though, self-editing interrupts the creative process and it can make you judge your writing. Also don’t stop writing to go research something, that interrupts flow as well. Put a couple of asterisks and go back to it later when you’re in the mood for doing some research.
Another tip that helped me was to try dictating your books. I was blocked creatively due to severe money worries – we really didn’t know where we were going to live and couldn’t afford any rents. Every time I sat down at the computer I was unable to think of anything other than our worries. When I tried dictating, though, it was wonderful – almost therapeutic. It can take a little while to get used to, you feel a bit self-conscious, but it starts to flow after a while.

Author Bio:
Michelle Booth is a former teacher who gave up teaching in 2012 to write full-time. She also writes as Michelle Campbell-Scott (publishing and marketing genres).

What Inspired You to Write Your Book?
A very vocal dog! Finn, our Rough Collie, really likes to make his voice heard. He sings, yodels, and generally joins in the conversation when we’re trying to talk. We always say we’re glad he can’t really talk as we would never get chance to speak ourselves.