You are here: Home / Autobiographies, Biographies & Memoirs / Missing Side of a Rubik’s Cube by C Enyo @C_Enyo 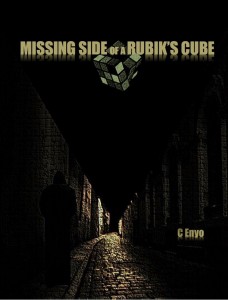 What inspired you to write your memoir?
Towards the end of my teens began an ordeal that taunted me for many years. I since always sought a way to bring to light my dark secrets – to illustrate the shady parts of life I had experienced, from police corruption to drug abuse. Having always been interested in the arts, at university, I began truly understanding and appreciating the power of the written word.

So, I began writing as a young adult, whilst studying Politics (deepening further into the mindset of human corruption) and embarked on many attempts to write general fiction but always felt held back by a dark shadow that hung over me. I just knew that in order to begin this career, I first had to wipe the slate clean and write my story – that which haunted me for so long.

I guess it was self-therapeutic and I feel it is something worth reading for many young adults and parents alike. Life is not rosy and there are some very dark turns that we often cannot imagine ourselves ever taking. Nevertheless, there is also hope, faith and an unprecedented amount of strength that can be conjured within us, when we need it most!

About your Book:
An INSPIRATIONAL THRILLER based on a TRUE STORY

In a world of exploitation, drugs and mental illness, hidden behind social deception, DO YOU KNOW WHAT’S GOING ON IN YOUR CHILD’S LIFE?

Growing up, we’ve all explored the intrigues of life, perhaps experimented with cannabis and lived a little precariously. Michael was no different, until one day he fell into the hands of corrupt drug enforcement officers turning his world upside down – never to be the same again!

Based on TRUE EVENTS, Missing Side of a Rubik’s Cube is the touching story of Michael, a young man who gets entangled in a web of police corruption and of Miltos, a mentally ill man with whom he forms an unlikely bond.

Plagued by demons and battling for sanity, Michael will risk crossing moral boundaries in pursuit of justice against his tormentors, taking us on a dramatic and emotional journey. But just how far is he willing to go in order to climb back out of hell?

How did you decide how to publish your book and where is it published through:
I decided to publish it once it had been finished and in all honesty, became quite skeptical with sharing my story to the world. I had sent a previous version to two publishers but left it at that. So once it was finished (after numerous rewrites), I had a professor of literature proof-read the manuscript and help edit the final version. I then, used Castalia Press – a small independent publishing house that I had set-up for my poetry works – and published it exclusively as an eBook on Amazon. For the time being, I will not pursue a mainstream publishing route and will see how it goes. Fingers crossed…

How do you see writing a Memoir as different from writing other genres of books?
It is hard to say. I guess it depends on the content of the memoir. Certainly in my case, it was extremely difficult. It was both a painful labor (due to it being so personal) and also a restricted one, in terms of implementing my literary skill. I feel that my technical writing and creative flow was hindered by a constant drive to keep it honest and as accurate as possible. I guess, this will be an issue for many memoir writers as more often than not, the story is about a hardship.

My family originates from the independent Greek-speaking island, the Republic of Cyprus, where I spent some of my childhood and high-school years – and where the story of Missing Side of a Rubik’s Cube begins.

At the age of 17, I returned to the UK and begun my higher education in my birth town, Canterbury. I read Politics and International Relations at the University of Kent and went on to acquire a Masters degree (MA) in the field of Politics and Government.