You are here: Home / Fiction / Missing in Thailand 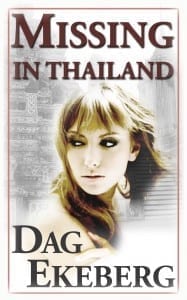 When a young female aid worker disappears in the impoverished region of Isan, her wealthy family contacts seasoned Bangkok journalist David Emerson for assistance. He has earlier vowed to quit helping his hapless fellow compatriots, but when the alluring and persuasive Liz Haydon comes calling, he’s unable to say no.

The search for Liz’ sister, Linda, starts among the rice fields and rubber plantations of the Ubon province, but it soon becomes apparent that they’re dealing with human traffickers whose trail leads to the infamous seaside town of Pattaya. Emerson is used to cutting through red tape to get things done in Thailand, but he’s totally unprepared to do battle with the nasty, well-connected criminals in Pattaya’s sleazy underworld. Then another girl goes missing…

Emerson is a reporter who makes a living off the many disasters—natural and political—that befall Thailand regularly. What he brings to this fight is a dry wit, an ability to speak Thai, and a fifth gear that he discovers can be engaged with a combination of adrenalin and alcohol.

I moved to Thailand in 1999 and have lived and worked here since. I have started several businesses, with varying degrees of success. Nevertheless, a prominent law firm hired me as a business advisor to expats a few years back–which meant that if I couldn’t learn from my own mistakes, at least others would.

Before moving to Thailand, I worked as a magazine publishing executive. I am a journalist with a Masters degree in Engineering–probably the only one. I went to school in Wisconsin and became a Midwesterner at heart after that.

My next book project, much in the same genre as “Missing in Thailand,” is underway.