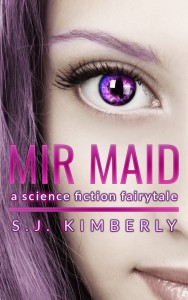 There are secrets known only to Sea Kings, and memories so dark they are buried deep within the earth…

Ana doesn’t look forward to another wedding season with its blaring reminders that she’s a freak who will always be alone. Thanks to a couple of pesky recessive genes that show up every few generations, she’s gifted telepathically and marked from birth for a life of chastity and service as a Maid.

Ana is just one of the galaxy’s misfits that leave their homes in hopes of acceptance into the Alliance Academy. Unfortunately, the nearest Academy is located in Fraternity City, a space station orbiting the water world of Mir. Controlled by clones intent on creating a master race, Fraternity City, a place of shadows where few dare the radiation of the daylight hours, is rumored to be cursed. This story follows four cadets from distant worlds as they find their way in a city filled with pirates, rogues, scientists, and star eyed dreamers.

Can one Maid from Mir make a difference? Will secrets be revealed in time to keep a dark history from being repeated?

What Inspired You to Write Your Book?
I have been writing unpublished short stories based in this fantasy universe for about ten years. The first was a Christmas story entitled “Kalendriels Song” that took place on earth. Another story, “The Children of Cain” follows the events on the Mir World around that some period of time. Both of these shorts are referenced as history in “Mir Maid”, which takes place 2700 later.

The real motivation to actually sit down and write a novel length work came with my grandmother’s death. I got to spend some time with her in the week or so before she died, hearing again the her stories of serving in the Women’s Army Corp during WWII. It was a life changing experience for her. She went from being an shy, awkward teen to a woman who would go on to found one of the first schools for training EEG technicians. Mir Maid is my attempt to capture a little bit of the spirit behind my grandmother’s stories.

How Did You Come up With Your Characters?
Some of my characters had their roots in Star Trek fan fiction I wrote as a teen. Lairdin started out as a half Betazoid/half Vulcan character in those stories. Ana also had some rooting in those tales.
Other characters in Mir Maid are generic composites of people I have known, especially during a time when I interned with about 500 other 18-20 year olds at a ministry that sent teens on short term mission trips. It’s as close as I have ever come to my grandmothers WAC experiences.
Some characters, like Becky Willis–who was supposed to die early in the book, but refused to–introduced themselves to me in the course of writing this story. Becky may just get her own book in this series.

In a time and a place distant from our own, a tale rises of the girl who overthrew corporations and overcame an army of genetically-engineered nightmares. Because of this, and the love that moved a city thousands of light-years across space, her name lives on. Wherever epics of heroism are told–whether on the ocean world of Mir, on the old Terran colonies, around the rainbow thrones of Drandel, in the midst of the Paruud Rebellion, or in the space-traversing cities which survived the Faerie Wars–on everyone’s lips is the name, Ana Kai.
The true tale of Anahita Kai begins on a day stolen from my mind for many years. On the day of my twelfth birthday my parents spoke in hushed tones. While I pined for the stars, my parents spoke of fortuitous betrothals. My life was all mapped out–a political marriage, the Academy, and someday a post as Science Adviser to the Council. So caught up in their schemes, my parents missed a knock on the door. I rushed to the garden wall, leaning over for a good view.
An old woman, ripe and windblown, leaned on her cane at our doorstep. She gripped an orb stone in her other hand, the only evidence of her crime, and the further sins she planned to commit. I’m sure she thought herself on a fool’s errand, but she put up a brave front. From the garden, I had a clear view of her as she turned to take in the modern homes with their perfectly manicured gardens. Uncertainty traveled across her plain features.
Muirgen Kai began and ended her life a Maid, marked from birth, as Ana would be, for a life of service behind convent walls. I suppose everything changed for her on the night an unwanted child was born and Muirgen decided to take the fate of the world into her hands.