You are here: Home / Fiction / Fantasy / Meraki: A Syren Story by Naomi Kelly 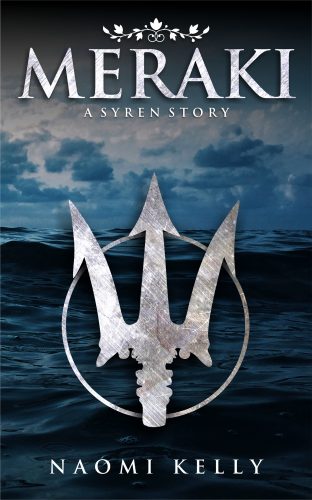 Her song is a gift bestowed by the gods; so why does it feel like a curse?
Seventeen-year-old Wren thinks she has just swum away from the greatest threat in the sea. That’s until she finds herself being hauled upon a warlord’s boat. With her life at the mercy of a young, temperamental King, Wren must decide who is her ultimate enemy. Can Fate be altered? What do gods have planned?
Syrens are bound to tell the truth, but that doesn’t mean their lives cannot be riddled with lies.

What Inspired You to Write Your Book?
The inspiration for 'Meraki' struck whilst I was walking along the beach with my boyfriend. I noticed something in the water and jokingly said 'What if it's a mermaid?' and then I started rambling on about how mermaids are normally portrayed as pretty, perfect women and never the creations that mythology would insist with powerful luring songs and gills, etc. Thankfully my boyfriend didn't point out that it was a just bobbling buoy I noticed and let my imagination run wild. By the time I got home, I knew I had to write this story.

How Did You Come up With Your Characters?
When creating the characters for 'Meraki', I knew I wanted my main character to be a strong-female lead. My character 'Wren' came about when I realized most mermaids/syrens in media are depicted as gorgeous women who would give up their song for a boy. Well, Wren is the exact opposite. It's actually her powerful abilities which grab King Kellan's attention, and the story takes off from there.

Book Sample
Everyone assumes sea creatures have terrible memories because of lower intelligence, but after three weeks of being underwater, I barely remember my name. At least common fish have the intellect to turn off half their brains to get some rest, but me? No such luck.
I did try to sleep at some stage last week, but yet again, the nightmares sought me out. No matter where I go, they follow.
Instead, I drift and think…. I float and fret.
I begin to hum to myself just to hear another sound, but I cut my tune short. The last thing I need is a pod of whales accidentally summoned to my side. I’m beginning to worry I’ve conceived every thought possible when I feel a disturbance in the water.
A ripple against my core. It’s too small to be a typhoon, yet too large to be the lurking shark who had its beady eye on me for days now.
Straining my eyes to peer through the murky waters, I spot a heavy net drifting downward. It unravels silently and opens its mouth wide like a hungry beast.