You are here: Home / Fiction / Paranormal / Manipulating the List by K. B. Lever 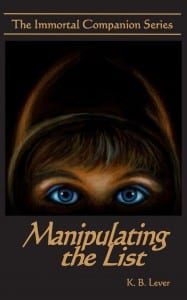 Katherine Sheppard is the exception to the rule. That is, as long as she continues to run from the law; murder innocent people; and manipulate the Collector’s List…

Since the tender age of six, Katherine has always loved to hear Jonathan’s nightly stories about tracking, stalking, and collecting his victims. She’s even had the privilege of watching souls transition into the afterlife, led by the hand of the Collector to their paths where angels or demons escort them home. It has been an unwavering friendship that has flourished for sixteen years. That is, until an unexplainable twist in circumstances causes Katherine’s name to appear on the Collector’s List.

Although, If you think her life would end there, you’d be mistaken. This is just the beginning. Katherine refuses to hand over her soul quietly and Jonathan upholds the decision of his only friend, feeling the bitter sting of helplessness as he realizes the possibility of being the cause for her demise. So now a new relationship unfolds between them, one of checks and balances, hints, clues, and mysteries, where the two must work together to manipulate the list despite a forbidden friendship.

But just as resolute, the law won’t stand idly by as Katherine assists in the deaths of others. Every form of law enforcement is preparing to conduct a global manhunt to bring her to justice. Nor will the Creator of the List tolerate a friendship that goes completely against his rules. The collections continue to increase in difficulty, pushing Katherine into an irreversible life of crime where the only possibility of escape is her own death.

Instead, Katherine chooses to fight as impassionedly determined as a trapped animal trying to escape its captor in her decision to overcome Heaven, Hell, earth and … the Collector.

How is Writing In Your Genre Different from Others?
I like to tie in real life events with fiction. I feel that it helps the reader to dive into the story.

*Manipulating the List has hit # 1 on the Bestseller list for Amazon.com in the Children’s Sci-Fi and Fantasy Genre.

What Advice Would You Give Aspiring Writers?
Prepare to do a LOT of work. No one ever made it anywhere in life by sitting on their rear.

Author Bio:
K. B. Lever is quickly becoming a most beloved storyteller. A life full of love, laughter, and curious twists and turns has brought her happiness, success, and fulfillment of her passions!

The author lives in North Carolina with her family and also works as a Paramedic for a large municipality.

What Inspired You to Write Your Book?
I have always enjoyed writing as an outlet since I was in middle school. This book happened to fall in my lap while staying home to raise my daughter. I had to find a way to occupy my time while she was napping. The book is influenced by real life events, history, and preying off of the fear of death.