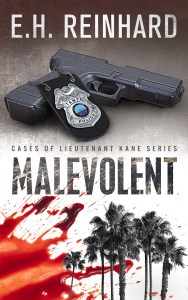 Tampa Homicide Lieutenant Carl Kane has a tough job. His day to day consists of decomposing dead bodies and removing murderers from the general public. But, when two women’s bodies are found under similar circumstances, it quickly turns into more than your average case. The killer is clearly looking to make a name for himself, and his plans for these women go far beyond death.

When the media runs with the story, the killer’s moment in the spotlight arrives.

It’s up to Lieutenant Kane to bring the man the press has dubbed the ‘Psycho Surgeon’ to justice. Yet, being the lead on the case has its drawbacks—like becoming the focus of the killer yourself.

As Lieutenant Kane closes in on his suspect, he soon realizes that the case has become far more personal than he could have ever imagined.

What Inspired You to Write Your Book?
I always enjoyed reading police and crime thrillers. After selling some of my own websites and blogging for others, I decided to challenge myself in the beginning of 2014. The goal was to write and publish three novels in a series. Mission complete. The fourth is under way.

How Did You Come up With Your Characters?
I have a handful of friends in law enforcement. I pick their brains about their day to day activities on duty. While nowhere near the levels of fiction, they all have their own stories. I try to make my characters somewhat believable in a fictional environment.

About the Author:
A native of Milwaukee, Wisconsin, E.H. Reinhard spent ten years in retail management before venturing into the acquisitions of viral humor websites in 2009. At their peak, his core group of owned websites generated 30+ million unique visitors a month. As the websites grew, the time involved to maintain, promote, and add fresh content to them began to take its toll. It was time to sell.
With new-found time on his hands, Reinhard freelanced in blogging and content writing until he took it upon himself to try something more personally rewarding and increasingly more challenging–writing fiction.
As a fan of mystery, thrillers, and crime fiction, Reinhard hatched the idea of the Lieutenant Kane series of police procedural novels. The story arc focuses on the life, on and off duty, of a fictional Tampa Police Homicide Lieutenant, Carl Kane.
While the series was originally planned to take place in Milwaukee, an opportunity to relocate to the Tampa Bay area arose for Reinhard. As he took the plunge and moved to the “Sunshine State”, so did his main character.
When not writing, Reinhard is an avid fisherman. He can be found during the magic hour on a canoe, flats boat, or just pitching from shore.