You are here: Home / Fiction / Mystery/Suspense / Made In The Image by Mickie Turk 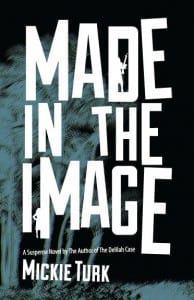 Made In The Image is rollercoaster suspense that picks you up on page one and doesn’t let you off until you’re begging for mercy at the cliff’s edge.

Markiza, Russia’s most notorious human trafficker meets his match when he goes up against Miami’s daredevil cop, Lydia Angelova. When the elusive kingpin plants a mole inside her task force, he foils a sting that would have exposed his operation and freed two hundred young male slaves. Lydia doesn’t know whom to trust, so she fakes her own death and radically changes her identity in order to stay in the game.

When Lydia returns to work with a new face and name, the welcome she receives from her old team is mixed. But the team pulls together as they ready to close in on Markiza. In a final gambit, everyone’s life hangs in the balance, especially when Lydia’s old lover and partner, Detective Darryl King, suspects her of being the secret mole.

How is Writing In Your Genre Different from Others?
My books are part suspense thriller and part psychological drama. I will always have a crime and complicated character studies but, at the same time, the stories rise to the level of literature because they deal with timely societal issues. I like tackling areas of race and color discrimination, as well, perceptions and relations regarding immigrants in America.

What Advice Would You Give Aspiring Writers?
Read as much as you can. Research your topics and subjects 120%. Take classes, join writing groups. Above all, be patient with yourself.

Author Bio:
Born and raised in Minneapolis, Mickie Turk has worked independently and commercially in film, photography and journalism, for the past 20 years. She wrote, directed and produced several films, both short and feature-length narratives and documentaries. Wayward Girls, which appeared in festivals and on PBS, can be found in libraries across the United States and Canada.

Between 1992 and 2004, Mickie traveled extensively to photograph and film. Included were four trips to Cuba-during the last expedition she brought back a rare Cuban shorts film festival to show at the Minneapolis College of Art and Design-a gazillion times to New Orleans and the south generally, and to visit family in Russia and Ukraine.

In the past eight years, Mickie completed three novels, several feature-length screenplays, a variety of short stories and memoirs, and continues to write for a number of Minnesota journals.

One of Mickie’s favorite activities is keeping up with her globetrotting daughter, whose travels have included Peace Corps service in Bulgaria and teaching English in South Korea.