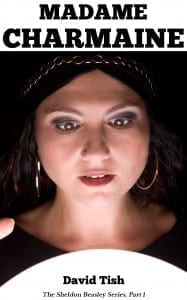 Madame Charmaine chronicles the adventures of three boys and a girl, all 12 years old, who discover a “treasure chest” half buried in the sandy shore of the Missouri River following a spring flood. As they play detective and try to find out who buried the chest and what its strange content means, they meet a tall, mysterious woman in a turban and soon find out they are playing a dangerous game and are nearly buried alive in a grave of their own digging.

How is Writing In Your Genre Different from Others?
The characters in the book are not wizards or zombies, space aliens or superheroes, magicians or maniacs, or mutants living in some bizarre futuristic world. They are “real” believable people living “real” believable lives that you would recognize and be comfortable with.
But in Madame Charmaine, “real” and “believable” do not equate with boring. Even adults have told me they enjoyed this book.


What Advice Would You Give Aspiring Writers?
I am so new to this business I wouldn’t dream of offering advice to anyone. Maybe some day.

Author Bio:
After I graduated from the University of Missouri in 1965 with a Bachelor of Journalism degree, I went to work as a reporter for the Lincoln, Neb., Journal. About a year later, the Omaha World-Herald offered me a job. I accepted and worked at the World-Herald until 1971, when I made an abrupt, albeit brief, career change and moved to Washington, D.C., and went to work for a U.S. senator.
I spent two-and-a-half interesting years in the nation’s capital, but in the end I missed writing so much that I left and went back to The World-Herald. Then, two years later I got a job as a reporter with The News-Review in Roseburg, Oregon. I stayed at The News-Review until 1990, ultimately becoming managing editor.
On Halloween night of 1990, my EFL (Editor For Life), Mary Reynolds and I climbed into a rental truck and drove to Seattle, where we lived for the next 17 years. During that time we both worked for newspapers in the Seattle area. We also were married in 2003. And I spent the final five years of my career as a copy editor at the Seattle Post-Intelligencer.
Let’s see, what else …
Well, I love music of all kinds. From Hoyt Axton to Beethoven. I love Steve Martin and Louis CK. I love Rachel Maddow. I love books, all kinds of books. (I never met a major Russian novel I didn’t like, and I’ve read almost all of them.)
Oh, yes, other books I have written. My first children’s book was Captain Cloud and the Dark Invader. It’s all about clouds, rain, thunder and lightning. The target is kids age 4 to 7 or 8. I had an entire class of first graders as beta readers for this book. Their comments after it was read to them were an absolute hoot!
I wrote a play called Shakespeare Is Dead! that I like a lot. And I wrote a book called Silence, Please! The Little Book of Tinnitus. All of these books can be found on Amazon.

What Inspired You to Write Your Book?
My own childhood. Madame Charmaine is set in small-town Nebraska. I was born and grew up in a small town in Nebraska. The four main characters in the book, three boys and a girl, are composites of kids I grew up with. And, I confess, there is a bit of the young David Tish in all of those characters.
All of the townspeople in the book also are based on people I knew back then, in the 1940s and ’50s.
Moreover, the description of the Nebraska countryside in Madame Charmaine is real, as is the description of day-to-day life in rural Nebraska all those decades ago. The pancake-eating contest, for example, which is told in what I hope you will find to be hilarious detail in the book, actually took place. So did the building of the raft that the three boys took out on the Missouri River.