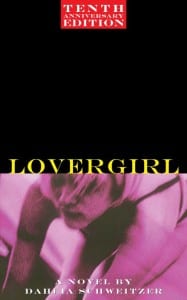 “Everyone has fantasies of who they want to be—how they want to be touched, looked at, loved, desired. But everyone is trapped being who they really are—or perhaps, who they’re supposed to be. I waited to find out what to do with
this other part of myself, the part that wanted desperately to be pushed up against the wall…to be messy…to be really, really bad. I waited and hoped that part of myself would go away.
But it didn’t…”

So begins Lovergirl and the story of young Adrian, a good girl from the suburbs living in New York City. There she finds the “adult entertainment” industry–and an opportunity to indulge her steamy secret obsessions. Along the way, new identities–the fierce and tempestuous Karla, the sultry and seductive Sydney–are invented. Inside a secret world no one wants to discuss, she’s finally able to be herself. But who is she?

How is Writing In Your Genre Different from Others?
It can be harder to talk about in certain circles. I sometimes worry about being judged for my subject matter.

What Advice Would You Give Aspiring Writers?
Books are built word by word. You just have to put them out there and worry about editing and shaping later.

Author Bio:
DAHLIA SCHWEITZER is a writer, curator, educator, and performer. Her books, articles, concerts, and installations–found across mass/mainstream, critical/academic, and emergent/underground channels–touch upon themes of media and identity; sexuality and femininity; decay and reinvention. Sometimes her intention is to critique and suggest, others to transform and advance, and yet others to arouse and entertain.

What Inspired You to Write Your Book?
I was just fascinated by these people who made a living doing things
other people refuse to talk about. America is all about drawing
boundaries between public and private — not only did these women make
their private public, they made money off of it! I thought it was
incredibly interesting. I was curious about the people who did this
and the kind of communities they built within their world.