You are here: Home / Bargains and Freebies / Bargain Books Under $3 / Love or Deception by Morgan K Wyatt 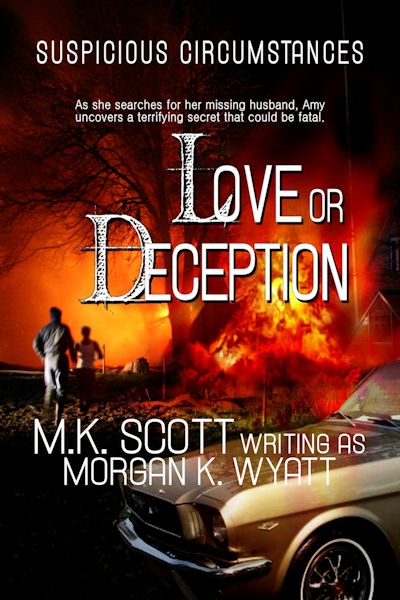 2015 RONE Romantic Suspense Finalist
2015 5-Star Readers’ Favorite
She had everything she ever wanted until everything including her memory vanished. Amy’s life changed in an instant the moment she opened her eyes to the unthinkable. Armed with little more than her wits and determination, she’s on a mission to put the fragmented clues of her husband’s disappearance, her inexplicable memory loss, and unearth a diabolical conspiracy that could have long-lasting implications for her and everyone in her midst.

He thought he could help her until he realized they were up against a far-reaching opponent. Ryan wanted to be the hero, but he never expected that a mission to help Amy regain her memory would force them to run for their lives, and worse, have no way out of a no-win situation with an enemy determined take over the world by any means necessary.
Will Amy be able to reclaim her memories and bring an end to the chaos or will her memories prove to be fatal for her and Ryan?

Find out in this high-octane romantic suspense novel that will leave you breathless!

What Inspired You to Write Your Book?
I played with the idea what if a conspiracy theory was true, but no one believed you. Amy knows something isn't right. Due to the gaslighting she's experiencing, she's not totally convinced it's not her

How Did You Come up With Your Characters?
Most of them are composites of imaginary folks and people I have met. No one character is drawn from a single person. The main character's, independent nature and drive is taken from a friend I know. Her appearance and colorful family background is all fiction, too.

Sometimes, I glimpse something in passing. An example of this is I spotted a man driving an older sedan that had all his clothes on hangers in the back seat. My immediate thought was there's someone who left in a hurry. Then, I try to see how I can work this into a story.

Book Sample
“I love you,” Mark whispered into her hair as he slipped one long, muscular leg over hers.

Amy snuggled closer to him, nuzzling his neck. Ah, she loved this time, right after a rousing lovemaking session when they were both sated and drowsy, drunk on the idea that in a world of mismatched couples, somehow, they found each other. Mark’s slight snore alerted her he’d dropped off to sleep. She should get up. There was so much to do before work. Instead, she stayed, breathing in the peace of the moment.

A bride, her, it boggled her mind. Not that she had anything against marriage. She just hadn’t foreseen it happening to her. How could it? All she did was work at Theron under major security scrutiny. The only people she saw were other employees, with the majority being women. The confidentiality clause she’d signed forbade fraternization between employees. The company must have a reason for being so paranoid. Right now, she didn’t care. All she wanted was her husband to awaken.

“Honey, do you remember our wedding?” Using her index and middle fingers, she made slow circles across his wide shoulders and around his muscular arm. The barbed wire tattoos encircling his biceps always surprised her, not that they didn’t look good on his tanned skin. They did. No, it was that she never imagined herself as a woman with a big gorgeous husband who could easily be a male stripper or a porn star with his looks. Nope, she never expected to marry. Even if a part of her held out hope, she never expected anyone without a heavier eyeglass prescription than hers.

Mark held up one arm, stretched and twisted it enough to make his bicep pop. He noticed her eyes following the play of muscles. His deliberate wink made her giggle a little. Geesh, just another sign she was way out of her depth. Truth told she never dated much, period. School, then work consumed her every waking moment.
He rolled to his side, facing her, and yawned before answering. “I do remember our wedding since I was there. Plus, it was only two weeks ago.”

All that was true, but it wasn’t what she wanted to hear. By mentioning the subject, he might tell her how wonderful it was or even describe it in detail. Did she expect him to gush about the meaningfulness of their vows? No way, she’d admit that she had issues bringing their wedding into focus. All she could see was a couple and minister on the beach with the sun setting in the background. With the shadows falling on them, it was hard to tell if the couple was even white, let alone if it was actually them. The sun was setting in the west, which worked since they married in Tahiti. Still, it had the same feeling of looking at a magazine ad for honeymoons.

The woman had on a short dress, and the groom wore a loose white shirt. That she could tell. They did have a whirlwind romance. Was it possible she was drunk when she married Mark? Was that why she couldn’t remember anything very well? Her hope was, by mentioning the wedding, he might also confess how wildly in love he was with her. It might ease her fears about the two of them being an odd couple.

Her Aunt Remy raised her with a healthy self-esteem. Being worthy of her handsome husband wasn’t an issue. It was more a case of like going with like. She’d heard enough comments when a couple showed with one partner being more attractive. When the woman was more beautiful, people assumed the man was rich and powerful. Charitable women might think he was charming and good in bed. Unfortunately, it never worked that way with the women. People seemed genuinely baffled and usually predicted a future break-up. Rather unfair if you asked her. Couldn’t the woman have some great trait? Maybe she was smart, interesting, and a decent conversationalist, even reasonably good looking with a slender build and short blonde hair. Her nose crinkled once she realized she’d just described herself.

The curve between Mark's shoulder and neck begged for nuzzling, which suited her. The simple action reassured her that they were actually married and together. A slow roll of her body had Amy looking up at her husband who pinned her to the mattress. “I think I know what my own Dr. Death needs.” He wiggled his eyebrows and leered at her.

For joining the author’s email/newsletter list you will get:
free short story