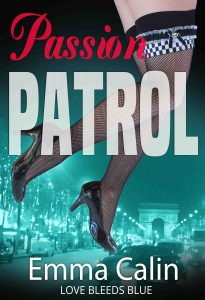 A London girl cop. A political crisis in Paris. A spark to fire the passion of love. One moment of courage to catch the destiny of history.

When single mother Sergeant Sophia Castellana stumbles into a terrorist shooting, things are not as they seem. The love of a far younger man and the infatuation of a charismatic French woman seduce her into a blur of inappropriate love and infinite danger. Power and celebrity beckon, betrayal and violence threaten every move as events unfold in the city of Paris. Her brute courage and loving woman’s heart confront ruthless enemies who offer no second chances. She knows the streets, she knows her power as a lover. Can she, dare she seize the prizes before her? Will a world offer her the choice?

Love Bleeds Blue, another stand-alone story in the Passion Patrol series of suspense romance novels. Steamy Emma Calin holds nothing back to bring you her juicy mix of cops crime and passion, with a large side order of French satire sauce.

What Inspired You to Write Your Book?
I love France and live there for much of the year and for a long time I've wanted to write a thriller-romance that takes in a Chateau near where I stay. It's called the 'Sleeping Beauty' castle as it was left abandoned for a hundred years. Luckily a wealthy sugar-magnate bought it in the early 1900s and restored it. It's an ideal hideaway – for fugitives, would be lovers, or for an elite team planning to take over Paris. With the the recent upheavals in European and world politics I've been toying with a number of 'what ifs' and this story was the result.

How Did You Come up With Your Characters?
Sophia Castellana is a London cop – she's brave and sassy but life has been tough for her – both in her job and personal life. My partner is an ex-Met Police and Interpol detective and he provides me with my inspiration for my cop characters, police anecdotes and procedures. Sophia's daughter Izzy is based almost entirely on my own daughter who is the same age and going through similar life-experiences. Much of her character and preoccupations are lifted directly from what I see between her and her friends. Equally, Charles Gonin apparently a young boyband star, is a similar age to my oldest son – but age is about all they have in common. Other characters in the book – well there are quite a few rather extreme political figures, the likes of which you could see in the news today. All names have been changed and of course bear no resemblance to persons living or dead. I had a lot of fun creating these larger-than-life public figures and playing with ideas of how the future develop if they got out of control.

All rights reserved. No part of this book may be reproduced or transmitted in any form or by any means, electronic or mechanical, including photocopying, recording, or any information storage and retrieval system, without prior written permission of the author. Your support of the author’s rights is appreciated.

All characters in this compilation are fictitious. Any resemblance to actual persons, living or dead, is purely coincidental.

They entered a large hallway with a beautiful tiled floor and followed the young officer up a magnificent wide curved marble stairway. He opened a door into a bedroom set with two double beds. A French window at the far end of the room led onto an outer balcony. The lieutenant went to draw the floor-to-ceiling deep blue curtains. Sophia put her hand to his arm to stop him. He stood back and smiled at her daughter. There were young guys and cops everywhere. Being a mother to this girl could be a nightmare. She looked out into the night. There were lights and small fires in old oil drums made into braziers. Groups of soldiers stood warming their hands while others patrolled among geometrically manicured trees and shrubs. She pulled the curtains and turned back to the room.
“Je vous laisse, mesdames. Il y a tout-ce qu’il faut. On vous appellera pour manger. A bientôt,” he said.
“On a combien de temps?” said Izzy.
“Quarante minutes,” he said.
Izzy dived fearlessly onto the bed.
“We’ve got forty minutes before dinner. Wow, Mum. This is like so cool.”
“Aren’t you frightened? Don’t you see this is dangerous shit? I don’t know what the fuck’s going on and I don’t know what we’re ever going to know.”
“Where did you get that track suit?”
“They gave it to me in London. I’m sick of it.”
“Looks like it’s sick of you too. Come on. Anna’s shown me the stuff we can wear,” said this confident wild child. This was not the kid she’d sent off to study at the University of Warwick. How could she tell her how Simon Westcott had died and what an AK-47 did to human flesh? How could she tell her that the mother she’d always known was a blood-soaked stranger? How could she tell her that all the smiling young men and beautiful people around her might kill her at the drop of the wrong word?

Izzy skipped to one of the enormous heavy oak French-style wardrobes. Every type of dress she could imagine was there and appeared to be her size. A series of drawers to one side contained packets of new underwear. The brand was French and unfamiliar. On the wardrobe floor was a rail of shoes. Izzy pulled out a black dress and an elegant cream bolero style cardigan.
“Anna said dinner’s going to be pretty much everyday so it’s not a big dress-up,” she assured her mother. “That woman is just so cool. She’s married to a millionaire business guy with a Champagne vineyard. He used to be a world champion boxer and he’s like fit, like really sexy fit.”
“Did she tell you that?”
“Nah. One of the French detectives told me.”
“Anna La Salle is one of Britain’s top cops. She’s always on TV and meets up with the prime minister.”
“She just told me she was a cop. She speaks French you know like perfect.”
“Izzy, listen, aren’t you wondering what’s going on here?”
It seemed at last that Izzy had caught her mood. The girl just seemed over-excited and flippant.
“Mum, I simply feel it’ll be OK. The world has gone out of control and there’s all kinds of shit going down.”
“Seems like the same old world shit to me.”
“Mum, you really should watch a news show or check out a newspaper. The global liberal consensus around center ground elitism has crashed. There’s a hole in the middle of politics and every saint or sinner is trying to fill it.”
“What? Where did you get all that stuff?”
“We get lectures, Mum. The world was controlled by money and corporate business. Politicians kept pumping out the blah-blah words to keep everyone calm and hopeful. It started with Jeffrey Corbett, the socialist guy. The rank and file dumped all the toadies and went for someone who stood for something. People saw the elite power as a sham.”
“He’s the beardy with the old jacket?”
“Yeah. That led on to Brexit, Farouche, and Grump. In France we’ve got Martine La Plume. Everywhere races and religions are slogging it out. All the rest are waving flags and guns. And no one’s getting a grip. Like no one, Mum. That’s the scary shit.”
“Do you think these guys are something to do with that?”
“What can a load of cops do? They’re playing a spy game against some terrorists, that’s all. We’ll be fine if we stay cool. Everyone’ll get bored with revolutions when Facebook and Instagram go down. Anna told me you’d seen something really secret and you’re here for your own protection. She told me not to bother you ’cos you’d signed the official secrets stuff.”
Sophia took a deep breath. Obviously they had reassured her and she’d swallowed it whole. She herself had lied to her about Simon’s death and for now there was no easy way back to the truth.
“Let’s get dressed for dinner. Do they really eat snails and rabbits?”
“Yeah. There’s a big ears double shell burger at McDonald’s. If you go large you get the bunny’s tail as well.” said Izzy with a giggle.
“I love you, Izzy.”
“Love you too, Mum,” she called back from the ensuite shower.