You are here: Home / Non-fiction / Personal Growth / Lose the Limits: Break Your Limiting Beliefs, Be a More Productive You, Achieve Everything You Want in Life by Christian Chasmer 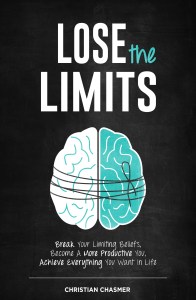 What Inspired You to Write Your Book?
I was inspired to write this book by seeing how limiting beliefs held back everyone in the world, including ones I loved and even myself. It was not until I learned about the power of limiting beliefs and how to break them that I gained control of my life. I thought that this information I learned was critical to share. My main goal in life is to help people so I wrote this book to help anyone held back by limiting beliefs.

Book Sample
I did not grow up with a silver spoon. I grew up on welfare, in a family where not one person had ever gone to college. I could have easily just accepted that this was going to be my future. But something deep inside me never agreed with that (and my mother would have probably kicked my ass). I went to a high school where out of about 260 graduates in my class, maybe 30 went away to college. The town, though it offers many opportunities to be successful through what I would consider a good education system, is like quicksand for many of its inhabitants. Many people get stuck there; they think that it is the only place in the world. Many of them fall to peer pressure and become drug addicts or criminals. They create a limiting belief in their mind that living in that town and being a criminal is all they deserve.

I knew, though, that I was going to achieve more, experience more. I earned an academic scholarship and went away to The University of South Carolina, which made me excited and scared as hell at the same time.  I knew I needed to be as successful as I could be there. I was not going to be content with being mediocre (which plenty of people would happily settle for). But I soon got absorbed in the typical freshman year shenanigans that some students fall into (I was, after all at an SEC school with SEC tailgates). I partied a lot and lost sight of what I wanted in life. I still earned great grades as school came easy to me, but I did nothing else to progress my future. I actually started to build limiting beliefs in my head that maybe I just wasn’t supposed to be great. I started to doubt my aspirations and goals in life.

It wasn’t until I shattered my ankle being a drunken 19 year old that I changed my life. I couldn’t walk for four months, which allowed for a lot of reflection. After deep moments of limiting belief building and depression, I realized I was better than where I was at that time. A change in my life happened from that period on. I came back to school during my sophomore year and won a scholarship to study in Italy for five months. When I returned, I worked as a server over the summer while looking for internships for the following year. During junior year in college, I joined the best internship on campus and had the unique opportunity to run my own business (which once again scared the hell out of me). I ran a $73,000 business as a 20 year old and won the “Performance Under Pressure” award with the company (I actually had to fire all of my employees and train all new ones in the middle of the season, which is almost unheard of). I was asked by this company to come back and teach others how to be just as successful. As a consultant and coach, my team of five college students produced $365,000 in revenue in just three months, and I won the “Executive of the Year award.”

Now, at 22 years old, I live in Boston (the city of my dreams), and I am a General Manager of the same training company I worked for in college, responsible for the entire New England Division. I choose my own hours and work most of the time from my own home. In my spare time, I focus on helping others break their limiting beliefs through coaching, consulting, and mentoring (which are my passions). I am literally living the dream, and it is all because I broke my limiting beliefs (and my ankle) and pushed my limits further than I ever thought possible.

I didn’t know it at the time, but I was using five simple principles to break my limiting beliefs and drastically better my life. From the point I shattered my ankle on, I made incremental steps to be the person I wanted to be. In this book, I want to show you these five principles because they literally saved my life.

Links to Purchase Print Books
Link to Buy Lose the Limits: Break Your Limiting Beliefs, Be a More Productive You, Achieve Everything You Want in Life Print Edition at Amazon

Link To Buy Lose the Limits: Break Your Limiting Beliefs, Be a More Productive You, Achieve Everything You Want in Life On Amazon