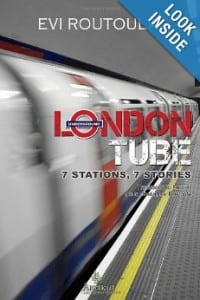 What Advice Would You Give Aspiring Writers?
To keep on writing regardless of their fears and negative thoughts

Author Bio:
I was born in Athens in 1968. Since childhood I had two major dreams: to become a lawyer and to be able to write. My first dream became true quite early. I studied Law at the university of Babes Bolyai Cluz- Napoca, in Romania. Since 1997 I have been working as a lawyer. As far a my second dream is concerned, I experimented a lot with writing. I translated two books from English into Greek, “Blood Ties” and “On Pilgrimage”; both books were written by the English authoress Jennifer Lash, both of them were published in Greece by “Kalendis” publications. The “London Tube, seven stations, seven stories” is a book that combines two great loves of mine: the English history and the London Underground.

What Inspired You to Write Your Book?
The London tube and its history