You are here: Home / Faith and Religion / Christian Fiction / Living in the Seventh Day by Jeanetta Britt 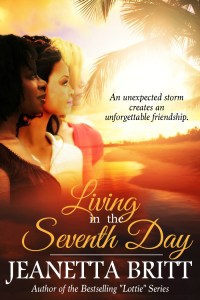 Jamine, Leeza, and Cristal have a chance meeting at the Atlanta Airport during Hurricane Allee. These three diverse women wanted to get away from each other, but they were forced to be joined at the hip in the cramped waiting area until the storm passed. In spite of themselves, they form a lasting bond before returning to their own separate lives that are on the verge of spiraling out of control. Will their hopes and dreams be blown away like the six-day reign of Hurricane Allee, or will they find the faith and courage to help each other hold on and begin again…Living in the Seventh Day?

What Inspired You to Write Your Book?
It occurs to me that no matter how different we think we are–backgrounds, race, finances–we all have some very basic and common needs. We have the need to be loved and understood, and we have the need to have a basis for our faith–who or what we hold onto in times of hardship and trouble. Jasmine, Leeza, and Cristal allow us to explore this reality from three very different perspectives.

How Did You Come up With Your Characters?
I needed at least three distinct characters from varying backgrounds to deal with this concept of coming to faith in Christ in order to deal with the everyday struggles and disappointments that come our way; and the belief that our lives do have order and purpose no matter how chaotic the circumstances may appear. And these three women could not be more different–one black, one white, one diva! They make for a comical and interesting trio as they find their way around their prejudices, untested beliefs, lies, and social status to form a lasting bond on the basis of basic human needs. [At first, Jasmine’s name was going to be Lavender (she’s the oldest and more prudish of the three women), but one of my Facebook friends/readers suggested ‘Jasmine’, and it stuck.]

Buy Living in the Seventh Day On Amazon