You are here: Home / Fiction / Live from the Road 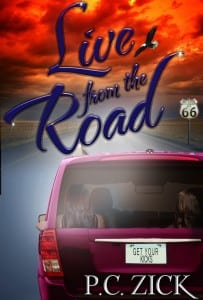 Meg Newton and Sally Sutton seek a change in the mundane routine of their lives. “Is this all there is?” Sally asks Meg after visiting a dying friend in the hospital. That’s when Meg suggests they take a journey to discover the answer. Joined by their daughters, they set off on a journey of salvation enhanced by the glories of the Mother Road. Along the way, they are joined by a Chicago blues man, a Pakistani liquor store owner from Illinois, a Marine from Missouri, a gun-toting momma from Oklahoma, and a motel clerk from New Mexico. Meg, mourning for her dead son, learns to share her pain with her daughter CC. When Sally’s husband of almost thirty years leaves a voice mail telling her he’s leaving, both Sally and her daughter Ramona discover some truths about love and independence.

Live from the Road takes the reader on an often humorous, yet harrowing, journey. Death, divorce and deception help to reveal the inner journey taking place under the blazing desert sun as a Route 66 motel owner reads the Bhagavad-Gita and an eagle provides the sign they’ve all been seeking. Enlightenment comes tiptoeing in at dawn in a Tucumcari laundromat, while singing karaoke at a bar in Gallup, New Mexico, and during dinner at the Roadkill Café in Seligman, Arizona. The four women’s lives will never be the same after the road leads them to their hearts – the true destination for these road warriors.

P.C. Zick was born in Stockbridge, Michigan, in 1954. She moved to Florida in 1980. Her career as a writer began in 1998 when her first column was published in a local paper. By day, she was a high school English teacher, but at night and on vacations, she began writing novels. By 2001, she left teaching and began pursuing a full-time gig as a writer. She’s been a journalist, editor, and publisher. She describes herself as a “storyteller” no matter the genre. She has three published books under her former name of Patricia C. Behnke. She has won numerous awards for her writing. Her fiction contains the elements most dear to her heart, ranging from love to the environment. She believes in living lightly upon this earth with love, laughter, and passion. She now resides in Pennsylvania with her husband Robert.