You are here: Home / Fiction / Drama / Lilly’s Album – based on a true story: A powerful story of love by Uri J. Nachimson 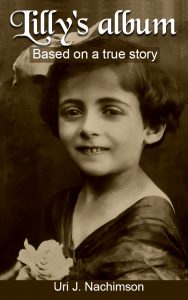 In the town of Wloszczowa on Christmas day of 1915, Lilly was born, the main character of the work of Uri Jerzy Nachimson – his aunt. In reality the characters in this book are many, because Lilly’s Jewish family was numerous, whose relationships were marked by a deep affection and mutual solidarity. Not lacking in this detailed and fascinating reconstruction of a family history extended to the destiny of a community, the episodes of misunderstanding, the quarrels, the expulsions, as happens to Lilly who, after a trip to Istanbul by his aunt Isabella, begins to caress the dream of leaving home to become an actress. Willful and already mature before many of her peers, the young Lilly even manages to learn in a short time the Yiddish to be admitted to the Warsaw Academy of Arts. But there is a bigger story that progressively shakes the lives of all Polish Jews: the war of the Nazi regime against them. From the first intimidation to the racial laws, to the final solution, Lilly’s album recounts with a dramatic intensity and realism the savage discrimination towards the Polish citizens of Jewish fate, the answers that the community itself was able to give in front of a tragedy whose proportions were then unimaginable.
A powerful novel about love, war, memories, which certainly will not leave the reader indifferent.

What Inspired You to Write Your Book?
When I returned to Poland in 1990 in search for my roots, I was deeply shocked by the attitude of the Poles towards the Jews, both during and after the Second World War, and decided to research the history of the Jews of Poland during that Era

How Did You Come up With Your Characters?
this is true story

Links to Purchase Print Books
Buy Lilly’s Album – based on a true story: A powerful story of love Print Edition at Amazon