You are here: Home / Faith and Religion / Spiritual Growth / Light in the Mountains — Namaste, Rakshi, and Electricity in a Himalayan Village by Jeff Rasley

At his wife’s behest, Jeff Rasley first trekked the Himalayas to resolve a mid life crisis. His travels around Nepal eventually connected him with a remote village in eastern Nepal called Basa.

What is real community? In Light in the Mountains Rasley relates what he discovered in the unique and ancient communal practices of the Rai people in remote Basa Village in the Nepal Himalayas. Rasley was welcomed into the community, not as stranger or even guest, but as “Dhai”– brother. The villagers taught Rasley the true meaning of communal hospitality. Rasley has returned each year to Basa and has helped to build an elementary school, a hydroelectric system, smokeless stoves, and a water system. But Rasley affirms that he has received more from Basa than he has given.

Reviewers have praised Bringing Progress to Paradise, the prequel to Light in the Mountains, as a more honest Three Cups of Tea. It is “Part memoir, part travelogue, part documentary, this true adventure captures your interest in the opening pages and leaves you yearning for your own personal pilgrimage through the remote villages of Nepal.” Cherri Megasko

“Well written and full of colorful descriptions and insights about the mystical Nepalese, this book made me want to get in high-altitude shape and go trekking under the shadows of the Himalayas to meet these wonderful people.” Glen Craney

Light in the Mountains is a call to those living in urban North America and Europe to regain the connectedness of community. The wisdom offered to “us” by Basa Village is to work hard but sing, dance, cultivate flowers, and enjoy life in community.

Readers of Bringing Progress to Paradise demanded the rest of the story:
“But the central issue … demanding a sequel, is the question of whether the “Progress” he is bringing, while admittedly of material value to the villagers, might lead to some degree of corruption of their way of life, a consumerist, Western-oriented degradation of a spiritual depth and sensitivity to their surroundings… I can hardly wait for the necessary follow-up in the next book of the series.” John McLaughlin, Ph.D.

“The reader is taken on a fascinating journey to explore, compare and contrast, as well as debate how the meeting of the East and West has altered the landscape and lives of people in this remote part of the globe.” Erika Borsos

“If I could picture a time pre-written word and be sitting around a campfire with the people of my community listening to the old story teller sharing stories of the quests of our people, I could picture Mr. Rasley being that story teller.” DJ Sauer

If you liked Seven Years in Tibet, read Light in the Mountains to find out whether “progress” has damaged the village called a beautiful little flower in the mountains. 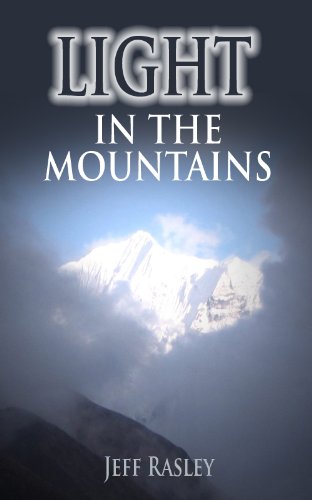 What Advice Would You Give Aspiring Writers?
For aspiring memoir writers — know your theme and develop it through your book. Do not just report facts or expect others to find your diary or journal worth reading.

Author Bio:
Jeff Rasley is the author of seven books and has published numerous articles in academic and mainstream periodicals, including Newsweek, Chicago Magazine, ABA Journal, Family Law Review, American Athenaeum, Pacific Magazine, Indy’s Child, The Journal of Communal Societies, The Chrysalis Reader, Faith & Fitness Magazine, Friends Journal, and Real Travel Adventures International Magazine. He is an award-winning photographer and his pictures taken in the Himalayas and Caribbean and Pacific islands have been published in several journals.

Rasley has engaged in social activism and philanthropic efforts from an early age. In high school he co-founded the Goshen Walk for Hunger. In law school he was an advocate of residential renters’ rights as a lobbyist and president of the Indianapolis Tenants Association. He is the founder and president of the Basa Village Foundation USA and currently serves as an officer or director for five nonprofit corporations.

Jeff is an avid outdoorsman and recreational athlete. He leads trekking-mountaineering expeditions in Nepal and has solo-kayaked around several Pacific island groups. He also loves to read and considers completing Marcel Proust’s 3600 page Remembrance of Things Past as great an adventure as climbing Himalayan peaks and solo-kayaking Pacific islands.

Rasley is a partner in the e-book publishing enterprise Midsummer Books through which he also provides writer coaching and editing services. He is U.S. liaison for the Nepal-based Himalayan expedition company, Adventure GeoTreks Ltd. He has taught classes for IUPUI Continuing Ed. Program, Indiana Writers Center, and Marian University. He currently teaches philosophy of philanthropy at Butler University.

For chairing the Indiana-Tennessee Civic Memorial Commission Rasley and the Commission received Proclamations of Salutation from the Governors of Indiana, Ohio, Tennessee and Pennsylvania and he was made an honorary Lieutenant Colonel Aide-de-Camp of the Alabama State Militia, a Kentucky Colonel and honorary Citizen of Tennessee. He was given a Key to the City of Indianapolis for serving as an intern to Mayor Hudnut and preparing a report on the safety conditions of all Indy Parks. Rasley has received the Man of the Year award from the Arthur Jordan YMCA and the Alumni Service Award from the University of Chicago Alumni Board of Governors.

Rasley has given serious and humorous interviews to many broadcast programs and provided programs for service clubs, community organizations, and churches.