You are here: Home / Fiction / Lethal Takeout by Vered Ehsani 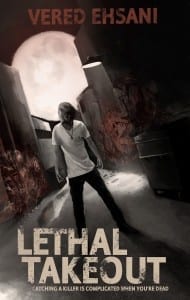 When Axe Cooper is murdered while picking up Chinese takeaway, he’s pretty irritated about the loss of a good dinner, not to mention being dead. Not prepared to move on just yet, Axe decides to stick around and haunt his best friend, Lily Chan, while trying to figure out why anyone would kill a janitor. In the meantime, Axe is hired by The Ghost Post to track down recently deceased writers. As he learns more about his new phantom friends, Axe realises that his murder is not an isolated event and that if he doesn’t learn to fly like Superman, Lily could be next.

Vered Ehsani has been a writer since she could hold pen to paper, which is a lot longer than she cares to admit. Originally from South Africa, she lives in Kenya with her husband, their two children and an assortment of animals with varying degrees of wildness. When she isn’t writing or daydreaming, she pretends to work as an environmental consultant. She often wishes she could float through walls and do other cool things, and that’s probably why she’s currently fixated on ghosts and other bodiless beings. Her work background is in engineering and environmental management. Visit her and her novels at veredehsani.blogspot.com