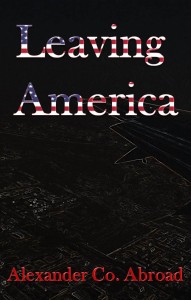 What inspired you to write your memoir?
This is my first attempt making my writings available to the public. I felt the story of a married couple leaving family and friends behind to chase a better way of life in the Middle East would be interesting. Writing about personal events in our lives was a new direction from the horror and political stories I’ve worked on privately. The idea of using pictures and commentary on social media helped family and friends experience our adventure in very realistic way. The Alexander Co. Abroad series was created with the feedback I received from our family and friends.

About your Book:
This is a condensed version of two other Alexander Co. Abroad books; “Living in the UAE” and “Italy, Egypt, Turkey, Oh My!” The images have being omitted leaving only text for a smaller file size and lowered cost.

This is the first book in the Alexander Co. Abroad series. It is a story about an American married couple leaving the United States to live and work in the United Arab Emirates, a small oil rich Muslim country located in the Persian Gulf. With a brief background on the two North Carolinian’s and why they chose to leave everything behind for a chance to travel the world while based in a Muslim country. The story is told from the husbands point-of-view as they experience cultural differences and language barriers while adjusting to their new environment. Examine the transition from living in a western society to living in a modern Muslim society and compare the differences and similarities to measure the quality of life each has to offer.

This is the fourth book in the Alexander Co. Abroad series. It continues the story of Samantha and Rick Jolly as they travel to nearby countries while living in the United Arab Emirates. The couple first explores Venice and Rome as they experience childhood fantasies come to life. Flying into Venice and taking a train to Rome during a winter holiday opens the world to the inexperienced travelers. Bitten by the travel bug the duo are joined by a close friend, “Ms. Rosemary”, on a trip of a lifetime to Cairo and Luxor in Egypt before flying to Istanbul and the ancient city of Ephesus in Turkey. The trio explores the awe-inspiring ancient Egyptian Pyramids and Temples while witnessing the daily hardships and struggles of modern day Egyptians. The last leg of the journey follows the travelers to the forgotten ancient city of Ephesus, the well-preserved Roman city ruins near the town of Selcuk, Turkey. The final stop is the famous Roman capital city of Constantinople known today as Istanbul, the only city with coordinates in both Europe and Asia continents. The western travelers struggle with the language and cold weather in-order to explore the world-renowned city filled with Christian and Muslim histories creating a one of a kind culture highlighted by its colorful people.

How did you decide how to publish your book and where is it published through:
Not having much faith in my writing skills I had doubts about traditional publishers. I tend to have many good ideas, but lack the patience to fill in the fluff, the character building and plot twists. After weeks of online research Kindle seemed like the site with the most users and best name recognition. With a limited budget self-publishing was very attractive.The upload process was easy with a short turnaround time to be available for readers.

How do you see writing a Memoir as different from writing other genres of books?
Writing a Memoir seemed easier for me since I didn’t need to make-up character hardships or unforeseen life obstacles as they all really happened to us. All I needed to do was write them down and fact check my memory on the dates and spelling of places. We took photos everywhere and had those to help explain the situations in the stories. When writing a fiction story there are no pictures to draw from, just notes and memory.

Author Bio:
Rick D.Jolly is from Taylorsville, North Carolina, the eldest of three sons raised in a blue collar family. Married to Samantha White-Jolly, they lived in Hickory, North Carolina before moving to the United Arab Emirates in the Middle East. He opened several social media accounts as a way to relate his experiences to family and friends, posting videos and pictures with firsthand accounts of trips in the UAE and Europe. After several years of living abroad he used previous online posts to help write a series of books called “Alexander County Abroad” with various subtitles to describe each location. The title comes from the county he was born in, Alexander, a small rural county in western N.C. primarily a farming region. A place where most residents rarely venture pass state lines and never travel out of the country or “lord have mercy” a Muslim Country.